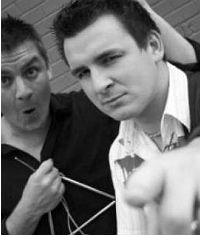 Two brothers, one Guitar and a Triangle!

Corporate Comedians Big Brother Little Brother are brothers Adam and Mathew Hedditch. Adam (Big Brother) is Australia’s premiere Trianglist and is a leading figure in the heavy metal scene. While Mathew (Little Brother) is an accomplished Guitarist who has mastered all the basic chords, even the hard ones like G and F.

In 2002, the boys won Greenfaces, a prestigious national comedy competition held each year in Canberra. Previous winners have included Joe Avati, Anh Do and Tom Gleeson. Since then, they have gone on to perform all over Australia and the World.

Big Brother Little Brother have appeared on the Footy Show twice, been on radio many times and have even been to Iraq to entertain our troops, not once, but three times. They have also performed at Parliament House, appeared on the Comedy Channel and entertained countless corporate audiences everywhere as professional corporate comedians.

Big Brother Little Brother are ideal for any corporate event or function. They are different, musical, funny, clever, cheeky and full of energy, without being crude or offensive. In fact, they are guaranteed to give your next corporate event that something extra!