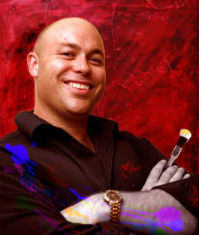 Brad Blaze may just be the fastest painter in the world.  He has enthralled audiences across Australia, Asia, United Arab Emirates and The United States performing at large gala dinners with guests including government ministers, celebrities and the social elite.

Brad spent the beginnings of his career working his ‘way up the corporate ladder’ in an international finance company.  On his way to and from work on long train journeys he would sketch other passengers without them knowing.  His passion for art eventually overcame him and by the year 2000 became a caricature artist working at events and having artwork published in magazines and newspapers.

In 2005 he developed his very own unique show and is testament to the mantra of following your passion in life.

At the turn of the century, then in middle management for a large insurance company, Brad was at the forefront of a culture change in his organisation which saw his team focus on a new strategy in the claims process, cutting reserves by millions of dollars.  It was against the grain, a thought ‘outside the box’ that produced significant cost savings and ignited a different thought process.  It was a team transformation.

Fast forward ten years and Brad’s has had his own personal transformation – taking his hobby of drawing and painting and turning it into one of the most successful corporate acts and being awarded the prestigious Entertainer of the Year at the Australian Event Awards.  Brad takes the audience on a journey from the office to stepping onto the stage and painting two prime ministers and some of the greatest sportsmen ever on stage.  The strategies, overcoming the fears and the thought process behind the transformation.

Throughout the presentation you will witness two remarkable visual transformations which illustrate visually the ability to transform.  He paints familiar faces and transforms them into some of the world’s greatest leaders of the past century, all in under four minutes.his shows. It’s good, clean fun.

Your ability to get the audience involved, laughing, and in awe of what you do is an Entertainment agents dream.  It would actually be enough if all you did was just paint … but you are so much more and that’s what makes you awesome.  You are reliable, enthusiastic, honest, hardworking, cheerful, dedicated, professional, witty, dynamic and super-talented.  I love the black cotton britches you work in, and it’s always such a pleasure to put you in display.

We secretly wish we had taken our art classes seriously in school when we met Brad Blaze, an Australian Speed Painter who was in town for Tampines 1’s official opening last weekend. Man, this bloke is a genius! We were totally filled with awe as we witnessed him completing a painting in less than 5 minutes.