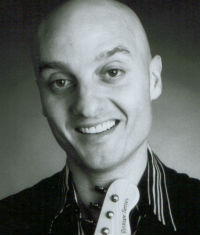 One of Australia’s most popular corporate comedians and television personalities, Bruno Lucia has well and truly earned his comedy stripes playing the live stand up comedy circuit around Australia, the U.S.A, and the U.K. His list of International stand up comedy credits include “Rascals Comedy Hour” on HBO, in The U.S.A, “Catch a Rising Star” NEW YORK and the “Comedy Store” in LOS ANGELES. In the U.K, ” Live at Jongleurs” on UK GOLD, and the “Comedy Store” in LONDON.

He has recently performed in places such as Amsterdam, Hong Kong, Bangkok, New Guinea, New Zealand and Tasmania!

This multi faced, multi cultural, multi media performer is a stand up comedian, master of ceremonies, musician, corporate entertainer and actor who is best known for his work on Channel Nine’s most successful hit sit com “All Together Now”, where he turned the lovable sleaze and agent to the stars “Wayne Lovett” into one of the shows most popular characters and made his phrase “Chicky Babe” a national catch cry.

As an actor, Bruno has featured in many dramatic acting roles guest starring in series such as Stingers, A Country Practice and A Ring of Scorpio.

On the big screen he has appeared in movies such as Sweet Talker, Time Guardians and Loves Brother. In addition to this, as well as writing his own comedy, Bruno is also an accomplished musician and songwriter, having played on the professional rock circuit for ten years.

On the corporate comedy scene, whether it be as an MC or after dinner comedy speaker, Bruno is an inoffensive, funny, reliable, laugh maker. He is a polished presenter who is guaranteed to supply the laughs having had extensive experience with product launches, advertising campaigns, training videos and award nights.

Bruno’s fast paced, one liners, skits, characters and musical comedy will add that essential ingredient – laughter – to your next corporate event!

Bruno was just excellent! He was very well prepared with some personalised material and the whole conference thought he was the highlight!

We laughed from beginning to end, and then some more.