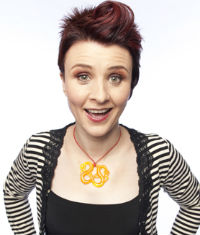 Cal Wilson came across the Tasman in 2003 and has gone on to become one of our most popular comedians, a perennial favourite on television shows such as Spicks and Specks, Good News Week, Thank God You’re Here, and more recently Have You Been Paying Attention? and Hughesy We Have a Problem. Her stand up shows are as engaging as they are hilarious, often bringing the audience’s stories to life alongside her own.

Cal earned herself a seat in one of Australia’s most sought-after writers’ rooms at the ABC for The Weekly with Charlie Pickering for its first two seasons. In 2016, she landed one of her dream jobs as an ensemble cast member in Whose Line Is It Anyway? Australia alongside some of the country’s brightest improvisers.

In 2018, Cal was invited by Netflix to the Montreal Just for Laughs comedy festival in Montreal to record a Netflix Original Comedy Special which was released in early 2019.

Cal is currently touring her brand new stand up show, Gifted Underachiever, and returns for the 5th year as the Melbourne live show host of the worldwide smash-hit storytelling podcast The Moth.