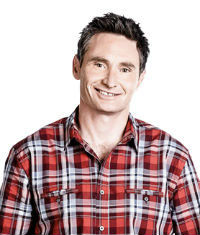 Natural and unmistakably Australian, Dave Hughes (Hughsey’s) laconic style thinly disguises one of this country’s fastest comedic minds. Turning everyday foibles into rich and hilarious routines has made Hughesy the biggest name in Australian comedy. For 12 years Hughesy made up one half of Melbourne’s Nova breakfast team and for 5 years he co-hosted Network Ten’s The Project, not to mention 10 years on Ten’s AFL show Before the Game.

While he never left stand-up behind, in late 2013 Dave shocked Australia by announcing that he would be giving up his radio and television jobs to go back to his roots touring a brand new stand up show for an entire year. That show, Pointless sold over 60,000 tickets and went to every corner of Australia as well as overseas to LA, Montreal, the Edinburgh Fringe and Soho Theatre in London’s west end.

In 2015 Dave returned to the airwaves with long time co-host Kate Langbroek in a national drive radio program and in 2018, Hughesy and Kate will be broadcast on HIT FM nationally from 4.30 to 6.30pm.

2017 was the third year that Dave opened the Logie Awards with a blistering and hilarious routine, smashing what is widely known as the hardest gig in the business.

Dave’s brand new television show Hughesy We Have a Problem, where Australia can have their problems solved by Hughesy and his expert panel of problem solvers, premiered on Network Ten in early 2018 to rave reviews from critics and audiences. Its first season was extended by the network not long after its debut.

Dave Hughes is one of the funniest men in a city that has produced many of Australia’s funniest people.

Hughes has become one of the most appealing, and most powerful, comics around.

…one hilarious dude… 70 minutes of relentlessly entertaining sarcasm and self-deprecation.