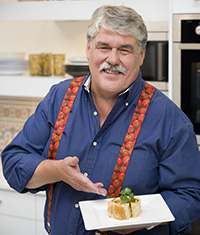 Iain “Huey” Hewitson has been a chef/restaurateur for over 40 years. Since arriving in Australia from New Zealand in 1971, he has owned and operated many highly rated establishments.

For over 25 years, since 1991, Iain has been a fixture on national TV with “Healthy, Wealthy & Wise”, “A Cook’s Journey”, “Huey’s TV Dinner”, “Never Trust a Skinny Cook”, “Huey’s Cooking Adventures” and “Huey’s Kitchen”, which aired for 11 seasons, where it attracted over 1.7 million viewers weekly.

His current venture “Huey’s Fabulous Fast Food for One (or Two)” is aired on YouTube, where it is generating a fair amount of media attention.

He has also had significant experience as a MC, host and guest speaker and, of course, has also conducted many cooking demos (obviously in a light hearted manner).