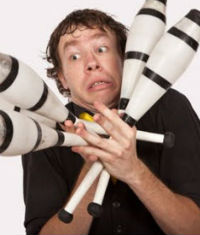 James BuSTAR is Australia’s Premiere Comedic Juggler. A veteran headliner on the world’s top cruise lines and an icon on the corporate performance circuit, James BuSTAR is one of Australia’s most sought after talents, and quickly becoming a sensation worldwide. He is billed as Australia’s Funniest Juggler, but he is also unquestionably one of the world’s most talented! Fans of all ages fondly remember his hilarious act from the 2009 Semi-finals of Australia’s Got Talent, and wide audiences have flocked to his entertaining and family-friendly performances ever since. Often compared to legends such as Frank Spencer, Lee Evans, and Buster Keaton, James BuSTAR is without doubt Australia’s Newest Comedy Sensation.

A TRUE COMEDY GENIUS
With a high-profile client list that includes BMW, Carnival Cruises, McDonald’s, Toyota, Royal Caribbean Cruises, and MasterFoods, and experience performing before groups ranging from 5 people to 10,000, James offers the sure-fire flexibility, professionalism, and universal appeal to please virtually any audience. Why wait? Your group could be the next to enjoy the uproariously funny audience participation, world-class juggling and variety acts, and the belly laughs which are staples of James BuSTAR Live. He’ll have your audience laughing in the aisles!

BIOGRAPHY
Who is this Hilarious Juggling Phenom?
James BuSTAR is one of Australia’s most sought after entertainers and is quickly becoming an industry go- to-guy worldwide. With a high profile 2009 Semifinal bid on Australia’s Got Talent, James became a household name, pleasing a nation-wide audience with his breathtaking skills and laugh-out-loud antics. Though his home and his largest market are both in Australia, James has performed globally, with tour stops in countries ranging from Papua New Guinea to Cambodia, and Vietnam to Japan. BuSTAR is also a staple on the corporate and cruise line circuits, boasting top tier clients such as BMW, Carnival Cruises, McDonald’s, Toyota, Royal Caribbean Cruises, and MasterFoods.

James BuSTAR is a headline act at performances and festivals all over the world, with live audiences ranging from 5 people to 10,000 people. A graduate of the World Renowned Flying Fruit Fly Circus, BuSTAR can legitimately claim that he is one of Australia’s most talented and skillful Jugglers. His unique show features stunts ranging from his death-defying axe juggling routine to crowd-favorites like his humorous bowling ball juggle.
Australia’s Got Talent was a major showcase for BuSTAR’s versatility and wide appeal, and he became the first juggler to make it as far as the semi-finals thanks to his unique style and original ‘contorted juggling,’ which amazed all three Judges (including the difficult to please Red Symonds). Judge Tom Burlinson even raved, “we’ve seen juggling…..and its just juggling, but you added something different to it.” With spectaular showmanship and fantastic entertainment value, James BuSTAR is a force in the live entertainment industry, sure to make audiences clutch their sides from laughing so hard every time.

SHOWS;
Many shows catered for all kinds of events
With one of the most dynamic and adaptable acts in the industry James BuSTAR Live is offered in several different formats and can be customized to meet any client’s needs, desires, and circumstances. James BuSTAR will have any crowd laughing, having fun, and playing along as your company and brand are enhanced by a positive, enjoyable atmosphere.
World Class Headliner for Top Cruise Lines