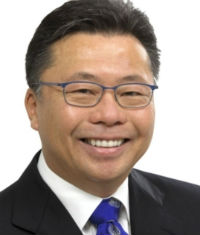 Ron Lee, CSP, globally known as ‘The Corporate Ninja’ Ron is a motivational humorist, keynote speaker, executive trainer and an instrument of inspiration. He studied at the National Institute of Dramatic Art (where Judy Davis and Mel Gibson trained) and was involved in the performing arts as an actor, director and theatre critic.

Over the past 22 years he has also studied six forms of martial arts. As well as regularly lecturing at the University of New South Wales, Ron trains senior executives internationally in leadership and personal power.

He uses acting, humour and deeper martial arts philosophies. Ron has been consulted by the CEOs of some of the top 100 corporations in Australia, New Zealand, USA, Canada, Asia, Scandinavia and Europe as well as politicians and sportspeople such as marathon swimmer Susie Maroney. Ron has also had roles in eight feature films including the legendary ‘Zombie Brigade’.

THE CORPORATE NINJA HOAX – Ron plays the role of a Japanese industrial giant who is the central
character in a motivationally interactive and inspirational presentation designed and written specifically for your organization.

He engages audience members to demonstrate the ways in which martial arts
techniques assist individuals and companies in exceeding personal and corporate goals.

The philosophies come from the ancient
writings of Chinese military general Sun Tzu (“The Art of War”) and from Miyamoto Musashi, an undefeated 17th century samurai who wrote about success, lifestyle, self-motivation and achievement (“A Book of Five Rings”).
After making an announcement that shocks those present, he conducts question time in which the answers are both outrageous and credible. At an appropriate moment, he reverts to Ron Lee who gives a humorous and comprehensive debrief of the exercises and how they relate to the company message.

The purpose of The Ninja is to motivate, entertain, and inspire.
The Ninja Hoax is performed at conferences, seminars, product launches, conventions, etc, and presentations can include “the board” and “the arrow” if you wish.

We pinpoint your corporate message to focus on such specifics as sales, leadership, change, teams and empowerment. According to clients, participants focus on solutions rather than problems and are inspired to raise levels of self-expectation of their personal performance.
The “value-add” is martial arts-based inspiration that you can use immediately in business and personal life.

You get a comedy Hoax AND valuable and powerful messages.

As I watched my team actually accomplish what was in their mind, an extraordinary feat of breaking wooden boards, I knew then that we would exceed our year end target which was still 11 months away.

Our associates are still amazed that for very astute financial planners they were not able to see through your ruse!! The amazement on their faces was priceless.Securitor Financial Group