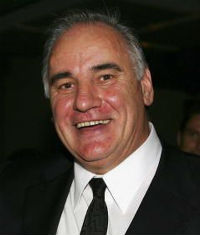 “Slammin'” Sam Kekovich is one of the real personalities of AFL football. He is well known for his controversial behaviour, both on and off the field, and his advocacy for the consumption of lamb. He is also well known for his satires as spokesman for Meat and Livestock Australia (MLA) to promote lamb.

A previous star player with North Melbourne and Collingwood, Kekovich was a fine contributor to North Melbourne’s first Premiership victory in 1975. Sam started his career with the North Melbourne football club in 1968 and in the following year won the club’s best and fairest award and was the club’s top goal kicker, kicking 56 goals. From that point, his brilliance was displayed only in flashes as he seemed to put more effort into other non-football activities, including soccer, trampolining and posing naked in the “Truth” newspaper. These began to grate with those in power at the Kangaroos. However, he did play a role in the club’s breakthrough premiership win in 1975. After playing 125 VFL games for the Kangaroos between 1968 and 1976, he moved to Collingwood in 1977, but only played four games, retiring that season.

During Sam’s playing days controversy surrounded him as he had several running battles with his icon coach Ron Barassi. During his career, which extended over 10 years, Kekovich participated in over 150 games, won a Club Best and Fairest and represented Victoria a number of times.

Since Sam’s playing days he has ‘turned himself’ into an entrepreneur and media identity. He has carried his flamboyant style into the media sector, being most notable for his rants on the ABC show The Fat and a breakfast show on Melbourne radio station 3AK. He also appears on Triple M’s pre-match AFL coverage and is on ESPN.

Kekovich’s direct-to-camera TV monologues are done deadpan and use wide-ranging cultural references. They normally place in contrast many disparate or incongruous verbal images and ideas, ending with him saying his trademark, “You know it makes sense. I’m Sam Kekovich.” He has performed these ‘rants’ on commercials for North Melbourne FC membership drives, Dan Murphy’s bottle shops, and, perhaps most famously, encouraging people to act less ‘unAustralian’ on Australia Day by eating lamb. In the lead-ups to Australia Day 2005, 2006 & 2007 Kekovich headed advertising campaigns encouraging people to eat more Australian lamb.

He was the President of the Hammerheads; the Football Team created by Channel 7’s show ‘The Club’ and was the Chief Executive Officer of ‘K Rock’ Radio in Geelong,

Sam’s presentations are always anecdotal and extremely humorous as he brings together all his best stories and the characters he has encountered over the last 30 plus years of his involvement in football, and life. Of course Sam also adds his own special slant and commentary on the world. ‘You know it makes sense: I’m Sam Kekovich’