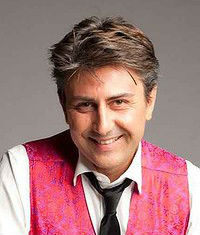 Simon Palomares is a Spanish-Australian comedian and actor, best known for his character “Ricky” in Acropolis Now.

Simon was invited by PARAMOUNT COMEDY to perform at the prestigious JUST FOR LAUGHS Montreal comedy festival.

Palomares was one of the creators and stars of the Wogs Out of Work comedy stage show, which later evolved into the Acropolis Now TV series. He has performed comedy shows in the United States, Canada, Spain and Argentina where he performs stand-up in Spanish. More recently, Palomares has toured Australia in a combination cooking program and stand-up comedy show called Palomares Cooks Calamares.

Palomares has worked as a writer in Madrid, Spain, for Lo Mas Plus, a nightly review program on Canal+, and directed a flamenco version of Lorca’s The House of Bernarda Alba at the Malthouse Theatre in Melbourne. He performed throughout most of 2007 with fellow comedians George Kapiniaris, Joe Avati and Nish Selvadurai in a national tour of their show Il Dago.

Most recently he has performed for the program Nuevos Comicos on Paramount Comedy (Spain) and is completing a documentary called KO HO NAS (Cojones) for Special Broadcasting Service (SBS) to be shown in Australia on November 11, 2009. He wrote and directed a short film, The Usual, which was acclaimed at the St Kilda Film Festival.

In 2006, he created, co-hosted and commentated on The Foosy Show, a program where contestants play table football (foosball), with George Kapiniaris on Channel 31 in Melbourne. In addition to his acting credits,below, he appeared as himself in an episode of the ABC series Smallest Room in the House, a series in which stand-up comedians told true stories of their upbringing.

Palomares has directed episodes of Neighbours and was second unit director on Totally Full Frontal. He has also provided voices in the video games Rome: Total War (2004) and Rome: Total War – Barbarian Invasion (2005).