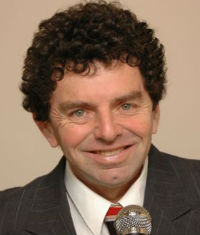 If an entertainer’s popularity is a measure of the quality of his show, Steve Davis reputation proves he is doing something right.

Let’s face it folks, anyone who has had his scripts performed on the Comedy Company, has performed on the Big Gig, before royalty at the Sydney Opera House and has been the support act to visiting international artists such as Bruce Springsteen, Simon and Garfunkle, Roberta Flack and John Denver, to name a few, can rightly be described as a great entertainer. I’m the guy!!!

I started out as a professional comedian in 1979. Since then I have hidden enough credits up my sleeve to lay claim to the title of Australia’s most innovative and versatile comedian. But I am way too modest to say something like that about myself. Let’s just concede the fact that I am bloody good!

How do I know? Well, I’ve had five NSW Mo Award nominations – so what if I didn’t win any of them, it was rigged. I was also nominated as Best Queensland Comedian in my first year living in here, well deserved recognition from my peers, but not as good as actually winning when you think about it.

For a while I was a regular presenter on The Motoring Show on the 7 Network where my comedy talents were put to great use. Too bad the show ran out of money.

Nowadays I work at conventions, conferences and high class functions. In case you didn’t know, the field of corporate entertainment is one that requires performers to be appropriate to their audiences, professional in their attitudes and unique in their presentation. That sounds like me.

Over the last few years I have taken the convention industry by storm with my loony characters including the “Comedy Waiter”, “Industry Expert” or the special persona I will create for your function.

Corporations such as the FBI, BMW, BHP, QUF, XXXX, BP and others who spell their name in full, have all used me and my businesses, I’LL DO ANYTHING FOR MONEY PTY. LTD. and FUNNY BUSINESS to provide an exciting and hilarious alternative to the entertainment they have used in the past.