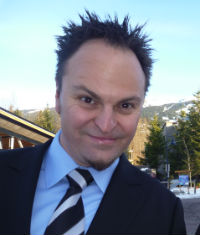 Steven Bradbury is not a stand-up Comedian but he is pretty good at standing up !

Would you call that a good icebreaker….

Olympic Champion, Champion Speaker and genuine onstage Entertainer is a unique skillset, and OMG talk about blowing your own trumpet !Transitioning from being an expert speed skater to an expert speaker has been an interesting ride for Steven over the last 10 years. Nowadays he works with a professional speechwriter and a comedian to continually hone his presentation skills. He has presented at over 750 conferences and events in 15 countries and still loves it.  He loves the adrenalin before going onstage, he is also an experienced ‘Master’ Of Ceremonies | Conference Facilitator and even does stand-up….

Speed skater Steven Bradbury created history in Salt Lake City when he became the first Australian to win a Winter Olympic Gold Medal.  His remarkable and unlikely victory was achieved after a spectacular final-lap spill took out his four rivals. Bradbury threw his arms up in disbelief and smiled as he crossed the finish line.

The four-time Olympian hails from sun-drenched Brisbane, and followed his father into the sport. He was a member of the 5000m-relay team that won Bronze in Lillehammer – Australia’s first Olympic medal. He has helped finance his skating career through his partnership in Revolutionary Boot Company – manufacturers of speed skating boots. Among his clients is Apollo Anton Ohno, ironically the favourite for the race Bradbury won.

His gold medal win was not entirely as fortuitous as many would believe. Bradbury knew his limitations and also the unpredictable nature of short track racing. Half the battle is staying on your blades, and Bradbury did just that, right when it really counted.  Dubbed “the luckiest gold medallist”, Bradbury won fans the world over for the honesty and humility he showed after the win. He saw his victory as reward not for one race, but for a decade of hard slog that has included more than his share of misfortune.

In Montreal, 1994, a race accident led to him being impaled on a skate and creating a cut so extensive he lost 4 litres of blood and required 111 stitches. He was extremely lucky to survive. Following that, a training mishap in 2000 broke his neck and forced him to spend six weeks in a halo brace.   Steven Bradbury again fought his way back, and two years later that neck was in the headlines again – only this time it hung with an Olympic Gold Medal.

Would not fault Steven in anyway! He will get a lot of referrals from this event. Some attendees had heard him before and commented how he has changed and is still getting better and better. They liked that he did not just talk about the Olympics. His comedy routine at the start was unexpected, funny and fantastic.

From me Steven Bradbury will come highly recommended as a guest speaker as he was both inspirational and hilarious.  What a great guy!  I really enjoyed his talk and I also enjoyed getting to chat to him throughout the evening!  He went above and beyond!

Steven was fantastic !  A very inspirational and funny speaker. In my opinion the best speaker I have ever seen.

Would not fault Steven in anyway! He will get a lot of referrals from this event. Some attendees had heard him before and commented how he has changed and is still getting better and better. They liked that he did not just talk about the Olympics. His comedy routine at the start was unexpected, funny and fantastic.