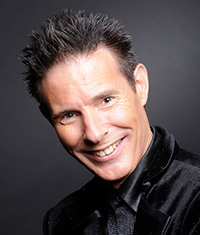 Tim Ellis, President of the Australian Institute of Magic, has won more awards for his mind-blowing magic than any other Australian in history. In the process he’s gained an international reputation as “the face of Australian magic” for his innovative, original and highly entertaining blend of magic and comedy.

Tim has been buried alive, escaped from a wooden crate at the bottom of the Yarra River, freed himself from straitjackets hanging thirty metres above city streets, and driven a $100,000 sports car while blindfolded.

He has performs regularly on luxury six-star cruise lines as well as shows in Las Vegas, New York, Paris, Cape Town, Beijing, Singapore, and The Magic Castle in Hollywood where he was nominated ‘Lecturer of the Year.’

Tim Ellis has acted as Magic Consultant on several plays, television commercials and the popular series ‘Blue Heelers’, and co-produced the Japanese NHKTV special ‘Magical Mystery Tour in Australia’. He has also produced many large scale events including The National Festival of the Magical Arts, several International Magic Conventions, and is founder and artistic director of ‘The Melbourne Magic Festival’.

In the magic history book ‘Dictionnaire de la Prestidigitation’, Tim is one of only two living Australian magicians to be included alongside Orson Welles, Houdini, David Copperfield and Siegfried & Roy.

Recently, Tim was diagnosed as having Asperger’s Syndrome, and he explores the pros and cons of the condition in his autobiographical one-man show ‘AspyCadabra’.

Tim offers five different entertainment options for your next event:

Tim is an expert at breaking the ice as he mingles with your guests at cocktail parties, banquets, trade launches, and even boardrooms! What makes it even more amazing is that Tim performs with nothing more than borrowed objects, razor sharp wit, and superb sleight of hand.

TRADITIONAL- Where Tim mingles with your guests performing for them over cocktails or at their tables.

EUROPEAN STYLE- Where Tim sets up a close up magic table and guests are invited to join him for “private shows” throughout the evening.

FIVE MOMENTS OF ASTONISHMENT– Imagine a David Blaine or Dynamo TV special live at your next event. Tim will perform five truly astonishing moments that will live in your guests’ memories forever. These performances involve days of advance preparation in Tim’s studio, but are well worth the extra effort involved.

“Everyone enjoyed the relaxed presentation and mystery entertainment.

Tim Ellis is Australia’s International Master of Close-up Magic having won twice at the FISM World Championships of Magic. He is considered a master of the art and is regularly invited to perform on TV shows and lecture at magic conferences worldwide.

PERFECT ENTERTAINMENT FOR GROUPS OF UP TO THIRTY

Tim’s Close-up Magic performances are fully structured theatrical shows that can be presented in a conference room, a private home, or even a VIP room in a restaurant.

For a totally unique experience bring your guests to Tim’s private venue in Northcote, The Laneway Theatre, where they can experience magic in a custom-built Gold Class theatre.

“Entirely comfortable the 32 seats allegedly liberated from a nearby cinema also offers every audience member a great view of the proceedings. From your first step inside that puts you into a glow-in-the dark graveyard to all the objects of magic sitting museum-like on shelves and the walls, the Laneway Theatre is a place of excitement and surprise that will draw you back. Still pictures are encouraged. You’ll need them to believe what you’ve witnessed.”

Tim Ellis has been described as “crazy”, “hyperactive”, “hilarious”, “inspiring”, “unpredictable” and “absolutely amazing!” In his Comedy Magic Show he’s all that and much, much more! The comedy comes from the audience members Tim invites up on stage, who always end up being the stars of the show.

THIS STAGE SHOW IS CUSTOMISED TO SUIT YOUR EVENT

When Tim performs he doesn’t tell jokes and do tricks, he involves the entire audience as he performs magic they can relate to, that is so amazing they’ll be talking about it for years to come. It’s interactive, immersive, and takes them to a place of inspiration and wonder.

“It is his showmanship that keeps you spellbound. His timing, comic flair and charisma ensure there’s never a dead moment.”

When you really want to put on a show that will leave your guests talking for months, Tim Ellis will bring out his Grand Illusion Spectacular! It’s a 45 minute stage show that goes beyond Vegas and features amazing magic combined with the type of stage illusions that most people only ever get to see on TV. In fact, Tim Ellis has too many Grand Illusions to fit into the one show, so he’ll create a customised show to suit your needs from his vast collection of immaculate deceptions.

YOU CHOOSE THE SIZE OF THE SHOW

The most practical Grand Illusion show includes just The Microphone Levitation, and can be performed literally anywhere… even surrounded.

If you’d like a bigger show you can add: The Houdini Trunk, Squash, CEO Appearance, Floating Audience Member, The Gravity Defying Box, or even The Smoke Chamber.

“The trunk illusion is absolutely magnificent and the roving “up close magic” after the show capped it off beautifully.”

Whetheryou’re planning an Awards Night, Talent Competition, Variety Show or a Conference, Tim has hosted them all!

With the emphasis on getting the client’s message across, Tim uses comedy, magic and hilarious audience participation to keep every person in the audience on the edge of their seats the entire time. Tim can host your next conference, panel session or show with style adding just the right amount of comedy, craziness, sophistication or simply creating a total party atmosphere.

He also has tricks, toasts and interactive games to get everyone involved and energised and is always prepared with a quick trick to fill for in a speaker who’s not ready. He can even make you CEO magically appear!

“Tim Ellis was absolutely fantastic yesterday and last night. Everyone loved him and he certainly added lots of fun and laughter to the conference plenary session and awards night. Most importantly he did a great job of keeping everything flowing smoothly.”

“Tim’s performance and skill as an MC dovetailed perfectly with what our function was all about.”