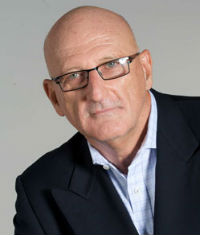 Alan Patching is regarded as one of Australia’s most internationally recognised presenters in his field. He has been described as ‘the Australian project and business leadership guru’.

Alan Patching’s speaking and consultancy client list reads like a ‘who’s who’ of the corporate and government world. The reason is his business credibility.His career has followed two separate paths, and he brings his experience from both to his presentations, offering a unique resource to modern organisations.

Alan topped a stellar career in construction and property with his leadership role in the development of the Sydney Olympic Stadium. He was owner’s Project Director responsible for its design, construction and pre-Olympic operations, and he was also CEO of publicly listed entity which owned the largest Olympic stadium venue ever constructed.

Alan’s previous corporate leadership positions include founding directorship of Australian consultancy, RCP Pty Ltd, founding director of Forte Consultancy of Sydney, director of a funds management organisation, and several other leadership positions covering industries as broad as hotel operations, aged health care, aviation and retail.
He was also a member of the Venues Coordination Committee for the Olympic Games.

Alan Patching has managed or directed over $20 billion (2012 dollar equivalent) of major projects throughout Australia, and in the early nineties negotiated the country’s largest ever property deal valued (then) at $1.4 billion, and its largest commercial lease. His business negotiations range from the sale and purchase of jet aircraft to the bulk buying of designer lingerie from leading international suppliers.
He is an adjunct professor at Bond University on the Gold Coast, and has been guest lecturer at several other universities.

He is the author and/or publisher of several business books and audio albums, video and training CDs, with an emphasis on Leadership and Management.

Alan Patching is very much in demand internationally as a keynote presenter on a range of Leadership and Management issues. His books, presentations and audio programs cover topics from negotiation and leadership skills to marketing and motivation. Two of his publications (the book The Futureproof Corporation and the audio album 21st Century Leadership) were written in co-authorship with Dr. Denis Waitley of the USA, himself a best selling author of many books, who has been Chair of Psychology for the US Olympic Team, and an advisor to the Apollo astronauts.
Alan Patching was one of four people chosen, in 1995, to represent Australia at an international professional business speakers convention held in the USA.

He has shared the speaking platform with many of the world’s greats, including Dr. Denis Waitley, Dr. Wayne Dyer, Dr. Tom Peters, Zig Ziglar, Joe Girard, and Robert Kiyosaki.
Patching is one of Australia’s busiest international presenters and in a typical year, he is typically invited to speak in every state of Australia, many countries in South East Asia, and in Europe and the Persian Gulf Region. He is known for his humour, thorough topic research, and his understanding of, and presentation to meet, the various sensitivities of people from across a wide range of cultures.

Alan Patching is a private pilot with command instrument ratings and endorsements to fly a number of aircraft, including several twin engined models and Lear Jets.
In 2001 he was awarded the coveted President’s Medal by the Institute of Quantity Surveyors in recognition of business leadership and service to the profession.

He is actively involved in community support work. Some examples include periods as President of school Parents and Friends Associations, Financial Council Membership for a Sydney community organisation, Board chairmanship for a high school and various similar roles. In 1999 he authored Stadium-The Project Director’s Diary, an anthology of stories and photographs describing the design and construction of the Sydney Olympic Stadium, to raise funds for the Sydney Paralympic Team. He does many speaking presentations for charity and often acts as Master of Ceremonies at charitable and community functions. He also regularly acts as mentor for young people.

Alan Patching is married to Annie, is proud father of four children and now lives on the Gold Coast in Australia.