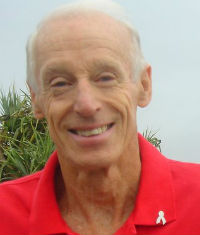 Australian-born but schooled in the United States, he returned to Australia in 1965 to start the Budget Rent a Car System. Budget in many way was a textbook success story, proving that in Australia you could develop an enterprise in which all employees were committed to excellence.

During his 25 years with Budget, Bob introduced Franchising and exported the Budget System to over 20 countries, including Japan and New Zealand.  He grew the company from a two-person small business to a dynamic enterprise employing more than 3000 people with an annual turnover in excess of $400 million.

It was Bob’s business philosophies, his ability to inspire his employees and his commitment to customer service that propelled Budget into a position of market dominance.
Budget was a trend-setter in employee relations being one of the first companies in Australia to introduce staff health and fitness programmes.

Business magazine BRW dubbed him “the entrepreneur’s entrepreneur” for he not only built a remarkable business but added a further dimension to the way in which business was conducted in this country at that time.

Leaving Budget in 1990, he established ‘Bob Ansett Marketing’ to manage his speaking engagements and provide consulting services in the field of Customer Service. This company now operates from Noosa Heads on the Sunshine Coast where Bob now resides.

His story has been well documented in his three best-selling books, “Bob Ansett, An Autobiography”, “The Customer” and “The Meaning Of Success”.

Recognised as a champion of small business, Bob has spearheaded campaigns against the Fringe Benefit Tax and Capital Gains Tax, encouraged deregulation and fought hard to change the ‘two airline system’ in this country – at a time when his was a voice in the wilderness.

He is presently a Director of the BSR Group and has been President of the Melbourne Chamber of Commerce, founder and inaugural President of the Australian Customer Service Association, Chairman of the Federal Government’s Trade Negotiations Advisory Group and was President of the North Melbourne Football Club for 13 years.  He also was a winner of the Sir Charles McGrarth Award for Marketing.

Bob Ansett spearheaded a 5 year campaign to rectify a wrong imposed upon the residents of Noosa Heads by the former Beattie government when it forced the amalgamation of the Noosa Council into the Regional Sunshine Coast Council. After a sometimes ‘bloody battle’, victory was ultimately acclaimed on Saturday the 9th of March 2013 when Noosa formally declared its independence from the Regional Council.