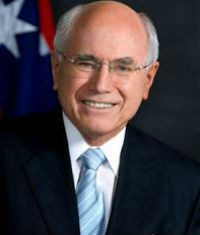 John Howard, born 26 July 1939, served as Australia’s Prime Minister between March 1996 and November 2007.  He is the nation’s second longest serving Prime Minister, was a member of Parliament for 33 years, and was previously Treasurer in an earlier government.

Under his leadership Australia enjoyed continued economic growth averaging 3.6% per annum.  His government delivered major economic reform in the areas of taxation, workplace relations, privatisation and welfare.  $96 billion of government debt was repaid during the time in office of the Howard Government.  When it left office in November 2007 the Government of the Commonwealth of Australia had no net debt, and its budget was in surplus.  This strong fiscal position was a major reason why Australia suffered relatively few consequences from the global financial crisis.

Mr Howard is a Companion of the Order of Australia and was awarded the Presidential Medal of Freedom, the highest civilian award in the United States by President George W Bush.  In January 2012 Queen Elizabeth II appointed Mr Howard to the Order of Merit.