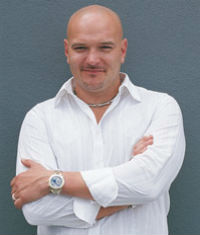 Justin Herald has fast become one of the rising stars in the fields of business and personal development. At the age of 25 with only $50 to his name, Justin Herald set about changing the course of his life. Justin created Attitude Inc, a clothing brand that became an international licensing success that turned over in excess of $20 million per year.

Justin’s success was so well noted that he was named the “INTERNATIONAL ENTREPRENEUR OF THE YEAR” for 2005.

He recently was also awarded the Future Leaders Award, which recognises him as being one of the 50 most influential leaders of the next generation in Australia.He has just launched “Intimidate Industries” which is his new Sunglass brand which already is a highly sort after brand before it even hits the stores, as well as owning numerous other highly successful businesses.

He has had his own column in numerous magazines and in papers nationally in Australia and overseas. His articles have a weekly readership of over 5.5 Million people. He also is the author of 8 international best selling books.He also personally mentors over 100 business owners each year.

Justin is regarded as one of Australia’s most sought after speakers with engagements book all over the country and overseas speaking in front of 150,000 people each year.