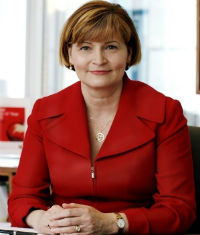 Rosemary Vilgan held the position as CEO of QSuper, one of the world’s largest pension funds, from 1998 until the end of 2015 and is globally recognised for innovation. Rosemary achieved from a very young age, becoming QSuper’s CEO at the age of 33 and simultaneously becoming the youngest person ever, and first female, to chair the Board of the Association of Superannuation Funds of Australia (ASFA).
In 2013, Rosemary was named as the 2013 Telstra Queensland and Australian Business Woman of the Year. She was also the Queensland and Australian winner of Telstra’s Community and Government awards and the Queensland winner of Telstra’s award for Innovation.

Rosemary built an organisation known globally for innovation:
In 2014 Rosemary won a Global Innovation Award from Pensions and Investment Magazine (USA) for a new product that helps members tailor savings to their age, account balance and the economic environment .
In 2013 Rosemary won the Telstra Business Innovation Award for Queensland
In 2000 QSuper achieved superannuation equity for Queensland Government workers, which benefited some 80,000 people, mainly women
In 2015 QSuper was awarded Best Superannuation Fund, Best Pension Fund and Best New Product.
In 2014 QSuper won Australian HR Award Employer of Choice (Public Sector and NFP) and had an employee engagement score of 88%.

Rosemary led the building of QSuper to become an award winning, globally vertically integrated financial services business for over half a million customers with almost $90 billion in accounts and $60 billion under direct management.To achieve this, Rosemary oversaw the building of an in house investment team and blended it with group life insurance, a large contact centre and operations and technology function, as well as the buy out of a financial planning subsidiary.

Community and Board Roles

Rosemary is recognised internationally as a strong leader within the business community. Some of her key roles have included:
Queensland University of Technology (QUT) – one of Australia’s leading universities with revenue of $1 billion
• Member of the Council
• Member of the Audit and Risk Management Committee for the Queensland University of Technology (QUT), having chaired this committee for nearly a decade until 2015
• In 2015, Rosemary was awarded an Honorary Doctorate from QUT for services to the University Association of Superannuation Funds of Australia (ASFA) – the peak body representing the vast majority of the $2 trillion superannuation industry
• Previously an elected director
• Six year as chairman of its board, being the first female and youngest person ever to chair this board
• Awarded Life Membership for services to the Association

• Building a culture of continuous innovation – How to build an organisation with a clear direction.
• Are you committed to exceptional customer service? – Asks the many hard questions in customer service delivery.
• Everyone is a leader – Is your organisational culture lived and breathed?
• Women don’t just live on Venus and men don’t just live on Mars -Do you have to manage women differently?
• Diversity – It’s not just what’s on the outside that counts – Why businesses should value “diversity of experiences”.
• So you really think you know how the investment world is developing? – How do the largest investors build their portfolios?
• Living money – Money is not all facts and figures. Emotions, upbringing and psychology all play huge roles.
• Your biggest financial asset is your superannuation – Superannuation is considered the most complicated product to buy.

Having led a major business through times of industry, economic and political change, Rosemary Vilgan is a highly accomplished former CEO who speaks frankly about the challenges and rewards of leadership. For the Committee of Economic Development of Australia Rosemary addressed a 400 strong senior cross sector and cross profession audience on leadership, leading change, focusing a business on the customer and on the future, diversity and business transformation. A great story-teller, thoughtful presenter and generous respondent to diverse audience questions Rosemary impressed, challenged, informed and inspired guests with her business and leadership insights.

I have listened to many professional and industry speakers over many years. What is sometimes missing is the backing of real life experience and the skills to draw a picture verbally. Rosemary can do both. Her deep experience particularly in a complex industry where you are competing for the hearts and minds of your customers means that to succeed, she has had to think outside the box. This need, together with a deep commitment to good government policy that extends outside her own organisation and into the community makes her a captivating speaker. Rosemary is also unique in that I have seen her effectively engage small groups in an informal workshop as well as hold an audience of over 1500 for a formal address. Presenters must be driven by passion, the strong desire to share, deep personal thinking and be informed by real life hard yards. Rosemary has all of these.

We were delighted that Rosemary accepted our invitation to speak at the MinterEllison International Women’s Day function for 2016 in Brisbane. With an audience of women and men at varying career stages, Rosemary spoke about her career in superannuation and provided practical advice about how to manage your money in a manner that is likely to bring you long term satisfaction. Rosemary was able to engage and captivate us all with her reflections, insights and advice delivered with humour and eloquence.