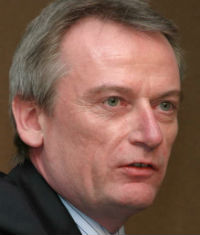 Chris Skinner is Chairman of the Financial Services Club and well known as an independent commentator on financial markets through his blog the Finanser.

Some people make things happen, some watch things happen, while others wonder what happened. As a commercial strategist, Chris Skinner looks through the window of opportunity for the financial services industry and delivers his discoveries back through insightful keynote presentations. Widely considered as one of Europe’s leading thinkers in strategy, financial services, banking, business development, payments, risk management and business transformation – when Chris is not travelling and delivering keynote speeches, he is Chairman of the Financial Services Club, a network for financial professionals and writing for his widely followed financial markets blog ‘The Finanser’.

Chris Skinner is the author of several books including “The Future
of Banking”, “The Future of Finance after SEPA” and “The Future of Investing after MiFID”. As a result his views regularly appear on news media including the BBC, Sky, Bloomberg and The Banker. Chris
has also been invited to Judge the Card Awards, TradeTech Awards, Banker’s Awards, Asian Banker’s Excellence in Retail Financial Services program and more recently to become a contributor to the World Economic Forum. As Chris Skinner guides audiences into the banking and finance market, he offers well informed views about what the future may hold and how we can best prepare for what lies ahead.

The Bank of 2020
Banks need to focus upon two numbers: one and 2020.
The bank of 2020 will also be the Bank of One. One person has always had the power to change the world – but in a highly social, highly networked world, that one person no longer needs to be a President or a Nobel Laureate. By way of example, Molly Katchpole was just a 22-year old college graduate working two jobs when Bank of America announced that they would introduce a $5 monthly fee on debit cards. She started an online protest that resulted in hundreds of thousands of people joining her within days. Result: the bank had to perform a policy U-turn. Molly is an example of one person taking a stand through social media, and changing the policy at one of America’s largest banks. In this presentation Chris will:
Shine the light on social media and how it is changing banking
How the bank of 2020 will look

Why banking will disappear but banks will not … well, not all of them
Over the next decade, a radical shift will take place in the role and function of banking. It’s already started and it’s all about BIG DATA. But it’s more than that. It’s to do with the value shift in society from seeing money to seeing virtual money; from seeing technology to seeing social technology; and
from seeing government to seeing self-governance. These shifts have been seeded in smartphones, social networks and the global linkage of every person on the planet to wireless media, and this shift will accelerate over the next decade. What this means for banks is that they will become hybrid keepers of money and data, and anything else their customers believe to be of value. They might even be keepers of cloud secure Facebook photo albums… why not? Chris will explore:
The impact of the key political, economic, social and technological forces of the next decade
Bring together these themes and outline the vision for the bank of 2021.

Branchless Banking and a Cashless Society: fact or fiction?
For years, banks and industry pundits have bet that cash and bank branches will disappear, yet they are still as strong as ever. Sure, cash and branches are reducing in number, but cash in circulation is still increasing as are the number of bank branches in some countries. Chris will explore:
Is a branchless, cashless future a reality or a myth? What this means for banking

The Next Major Global Financial Crisis Will Be in 2045
Regulators have a problem. The problem is that they are always following, never leading. Right now, they are shaping a new financial market that should be robust for decades to come. Yet based upon historical extrapolation, the likelihood is that the next global financial crisis will occur around
2045, thirty-three years from now. Chris Skinner, a leading commentator on global financial markets, will explain:
What is going to happen? And How?
Why is this the likely outcome and where will the issues occur?
The similarities between banks and landmines
Banks are like landmines that explode in economic terms, in a similar way in which landmines explode and blow away people in the real world. Just as landmines blow the legs away from humans, banks blow the legs off economies.
It’s obviously the case that this is true today, what with the Lehmans collapse with Credit Default Swaps creating the first financial crisis; and now sovereign debt in the Eurozone is developing the second. Chris will explore:
How can such economic landmines exist in a world where we should have cleared them by now
How can we avoid them in the future?
Money is meaningless
Since PayPal began, we have seen money being digitised. Now mobile is booming, the whole mechanism of money and customer interaction is being revolutionised. Add to
this Facebook credits and other virtual currencies, and you soon realise it’s not about money but it’s about value. Value management in all its forms – money, knowledge, ideas, time, goods, services, trade – is the critical focus for tomorrow’s institutions. Chris will explore:
As value becomes exchanged in all forms of virtual and physical form, how money becomes meaningless.
What does it mean for you?
Are Bankers Good or Bad for Society?
In previous ages bankers have sometimes pecked lower in the order of society than lepers. Jesus declared their usurous ways immoral. Amazingly, from this disadvantaged position in society, bankers flourished over the past two centuries before imploding spectacularly both financially and socially in 2008. Bankers now don’t even trust each other. This illuminating review of the history and future of banking and society explores:
Why these former outcasts from high society are natural problem children
Ponders whether they have a social future and, if so, what will it look like?