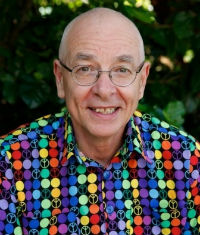 Whenever the announcer gives out the phone number for Karl Kruszelnicki’s famous Science Talkback show on Triple J, on Thursday mornings – so many calls come in that the ABC switchboard crashes!
Karl’s media career began in 1981, when he started presenting ‘Great Moments In Science ‘ on Double J to pay his way through medical school. Since then, his media career has exploded from radio to include TV, books, newspapers, magazines, scripting, professional speaking, and of course, the Net. Karl made his TV debut in 1985 as the presenter of the first series of Quantum. Since 1986 he has reported science on the Midday Show, Good Morning Australia (including a full-time stint in 1991-2 as the TV Weatherman and science reporter), the Today Show and Channel 7’s breakfast program Sunrise. Along side his fellow geek Adam Spencer, he has written and co-produced two series of Sleek Geeks. Karl also popularises science on ABC radio stations across Australia and, on the BBC, for several hours each week.

Karl has written 34 books to date, beginning with ‘Great Moments In Science’ in 1984, and includes such titles as ‘It Ain’t Necessarily So…’Bro’ (2006), which was launched, quite literally, via rocket at Sydney’s Bondi Beach (a world first). His latest two books, ‘Game of Knowns’ (for the grown ups) and ‘Dr Karl’s Big Book of Science Stuff and Nonsense’ (for the kiddies), were released in October 2013.

In 1996 Karl was invited by the United States Information Agency to be a Distinguished Foreign Guest in their International Visitor Program. Previous Alumni of this program include Julius Nyere, Anwar Sadat, Indira Ghandi and Margaret Thatcher. As part of this program he visited NORAD, Dryden Air Force Base and the Jet Propulsion Laboratory – and got to sit in the front seat of an SR-71 Blackbird.

In August 2000 Karl was one of first eight Australian Apple Masters to be announced (there are fewer than 100 in the entire world). The Apple Masters Program celebrates the achievements of people who are changing the world through their passion and vision, while inspiring new approaches to creative thinking.
In 2002, Dr Karl was honoured with the prestigious Ig Nobel prize awarded by Harvard University in the USA for his ground-breaking research into Belly Button Lint and why it is almost always blue.

In September 2003, Dr Karl was bestowed with the great honour of being named ‘Australian Father of the Year’.

In recent years, Dr Karl has been appearing on TV segments on Channel 7’s Sunrise and ABC News 24. His weekly podcasts are also available on the ABC website, which is gaining popularity from audiences across the globe.

Karl has degrees in Physics and Maths, Biomedical Engineering, Medicine and Surgery and has worked as a physicist, tutor, film-maker, car mechanic, labourer, and as a medical doctor at the Kids’ Hospital in Sydney.
Dr Karl is currently the Julius Sumner Miller Fellow at Sydney University, where his ‘mission’ is to spread the good word about science and its benefits.

His enthusiasm for science is totally infectious and no one is better able to convey the excitement and wonder of it all than Dr Karl Kruszelnicki.