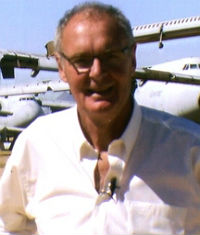 Jeff Watson is a broadcaster, author and journalist with over 30 years experience in the print and electronic media in both Australia and the U.K. He has contributed to such programs as “This Day Tonight”, “Four Corners”, “Holiday”, “Sixty Minutes”, “Getaway” and “Towards 2000”, a program he devised in 1979 which is now seen in most countries around the world including the United States and the USSR.

Away from his media commitments Watson has produced and presented numerous corporate videos.

He has written and presented many documentaries on science and technology subjects including Spitfire Over Australia (ABC, Discovery Channel), Kittyhawk (Nine Network), and The Last Plane Out of Berlin (ABC, History Channel).

Jeff Watson is in big demand as an MC at conferences as well as an entertaining after dinner presenter specialising in science technology and travel. In 1996 he was created a Chevalier of the Order of Merit by President Mitterrand of France.