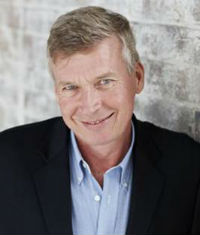 Paul Clitheroe and his four partners founded ipac in a one room serviced office in 1983. It was a less than auspicious start as they had each invested just $20,000 to start the business and could only afford one shared desk, one phone, no secretary and took no salary for the first two years.

Over two decades ipac has grown significantly and now manages in excess of $5 billion.

Paul and his partners also own similar business in South-East Asia, South Africa and Dublin.

In early 2002, Paul and his partners concluded negotiations for AXA to purchase ipac. This new relationship will see ipac grow its presence as a high quality provider of advice.

Paul has completed his undergraduate degree (BA) at the University of NSW, he is a CFP (Certified Financial Planner) and a Fellow of the Securities Institute.

He has been actively involved in the financial planning industry, being the Financial Planning Association’s Vice President in 1993 and President in 1994. As well as being host of ‘Money’ for 10 years, Paul does ‘Money’ segments on A Current Affair, produces ‘Money’ specials and is Chairman of Money magazine.

His columns run in over 60 newspapers weekly and his daily ‘Money’ tips are heard on radio around Australia. His books have sold over 500,000 copies, a rare achievement for an Australian non-fiction author.