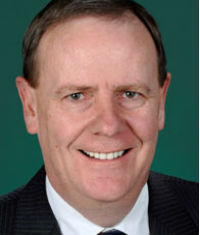 Peter Costello is Managing Director of BKK Partners Pty Ltd, a corporate advisory firm, which he joined in November 2009 after serving over 19 years in the Australian Parliament.

Peter Costello was first elected a Member of the House of Representatives for the seat of Higgins in March 1990 and re-elected on six subsequent occasions.

He was elected Deputy Leader of the Liberal Party of Australia in May 1994 and served in that post to November 2007.

He was Treasurer of the Commonwealth of Australia from 11 March 1996 to 3 December 2007, the longest serving Treasurer in Australia’s history.

Peter Costello brought down twelve consecutive Federal Budgets, including ten surpluses.  During this period he eliminated the Commonwealth Government net debt of $96 billion.

Peter Costello introduced the largest tax reform in Australian history called: A New Tax System, which introduced GST, abolished seven taxes and reduced income, capital gains and company taxes.
Amongst other things during his time as Treasurer he:-

CURRENT
In December 2009 Peter Costello was appointed a Guardian to Australia’s Future Fund.  He is currently a Member of the Independent Advisory Board to the World Bank in Washington.
In January 2011 he was made a Companion (AC) in the Order of Australia.
He has written a best-selling memoir published in 2008 by Melbourne University Press.
Peter is married to Tanya and they have three children.
Peter holds degrees from Monash University where he was, for a time, a part-time teacher in law and economics/politics, as well as a member of the University Council.  Prior to entering Parliament, he was a barrister.  He was counsel in some of Australia’s best-known industrial disputes.
Peter Costello describes his favourite activity as cooking on the barbeque at home (badly) and following his beloved football team (passionately).