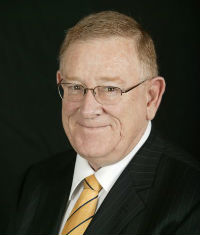 Phil Ruthven is the founder and Executive Chairman of the IBIS group, Australia’s best known business information, forecasting and strategic consulting corporation. He is also a director of other companies.
Phil contributes regularly to radio, TV, newspaper, magazines and commentaries on business, economic and social issues. He continues to be one of the nation’s most frequent and prolific commentators in demand by the media, and is possibly Australia’s most respected futurist.

He has been known to address over 150 conventions, seminars and conferences in a year, but nowadays limits this to around that number. His involvement as a communicator and informer at such conferences takes him around Australia and overseas into Europe and the Asia Pacific.

Phil is a science graduate from the University of New South Wales. He added to these qualifications with further studies in management and economics at various universities and institutes, and he was a Rotary awardee to the USA in the late ’60s. He spent over ten years in the food industry, including executive positions in research, production and marketing, before establishing IBIS in December 1970.

IBIS has earned the reputation as astute business analysts, based on their unique and comprehensive data bases. Its foresight and insight of business trends is outstanding, with the most envious record of accuracy among its peers in the nation. Their clients include over one third of the nation’s Top 500 corporations and government authorities. IBIS has become the premier provider of information to the Australian business community.

They have enormous optimism for Australia’s long term future into the 21st century following the extreme difficulties of the ’90s, but also a healthy respect for the fact that it will be our best owners, managers and enterprises that will take us into the next golden age of prosperity in the middle of the next decade.