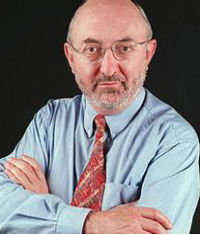 Terry McCrann has provided critical analysis on the wide range of events and personalities that have shaped the nation, from the entrepreneurs to the politicians. And, he has been at the centre of many of the great controversies and debates that have erupted over the Hawke-Keating and Howard-Costello years.

Terry gained an Honours degree in Economics from Monash University. In 1975 he became Finance Editor for The Sun and the following year Finance Editor of The National Times. Two years later in 1978, Terry was appointed Business Editor for The Age. Joining News Limited in 1987, Terry is currently Associate Editor of Business for Melbourne’s Herald Sun newspaper, The Daily Telegraph in Sydney, and Courier Mail in Brisbane.

The ability to communicate is an essential part of a speaker’s profile.  Knowing the subject is just one part of successful communication.  Terry McCrann’s enduring influence in the media is testament to his communication skill.  But he has the knowledge to go with it.