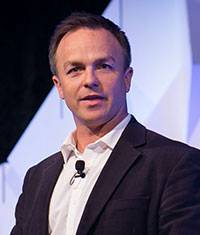 Aaron Williams is the CEO and co-founder of Mindstar (a national wellbeing and mental health company), an executive coach and an Accredited Mental Health Social Worker (AMHSW).

Aaron is also a passionate and entertaining keynote speaker, who has spent the last 25 years inspiring people to be their best as he talks through the why, how and what of wellbeing and mental health at live and web-based events. His simple tips, tools and inspiration help every person to feel happier, stronger and healthier, every day.

Aaron combines his clinical mental health background and corporate experience, in an effort to crush the stigma associated with seeking support and inspire people to focus on, improve, and maintain their wellbeing.

Aaron Williams has a unique and inspiring story.
Originally an IT Account Executive from a corporate background, the fuse for his industry-leading work in wellbeing and mental health was lit in 2003 after an extended period travelling, living and working overseas. During this time, a young friend died suddenly and Aaron experienced a period of depression and suicidal thinking. He returned to Australia in

In 2015, Aaron co-founded Mindstar, the mission for which is to make Australia the happiest, healthiest country in the world. Mindstar works with national organisations including: ANZ Wealth, NAB/MLC, AIA Insurance, Zurich Financial Services Australia, Vinomofo, Telstra Business, Queensland Ballet, Suncare and the University of Queensland.

Aaron initiated UNPACK: The show about life shit, during which he interviews high profile and inspirational people from all walks of life, talking to them about their remarkable stories of wellbeing and resilience.
Aaron has appeared on television and radio and in print media, including: Channel 7,9,10 news; ABC- NEWS-24; Channel 9’s A Current Affair; Triple J Breakfast; 2SM; ABC Drive Radio and numerous regional radio and newspapers.

Aaron was invited to join LinkedIn Live show ‘Together In Business’ to share his expertise and wellness tips for professionals during the pandemic crisis. Aaron was an approachable and engaging guest, offering tangible advice and guidance on mental health wellbeing and adapting to new ways of working — kindly answering live questions from LinkedIn members.
Viewed more than 6,000 times by professionals across industries including technology, manufacturing and education, feedback on Aaron’s “great ideas” and particularly his “buffer time tip” was overwhelmingly positive.

Aaron was a guest speaker for our recent webinar offered to our support team. Aaron spoke about how to improve our wellbeing, dealing with stress and uncertainty and the importance of self-care. Aaron was authentic, engaging and could apply his expertise to everyday examples as his life as a mental health professional and dad. We had over 100 team members join the webinar, receiving really positive feedback for Aaron’s session post the event. From one of our team members – “Aaron’s talk was my highlight as it was in the context of Covid 19. He provided some great insight into mental health and I think that he should give a similar presentation to all employees as it would help everyone to better understand themselves and others.

always enjoy working with Aaron. Leadership takes many forms, and sometimes we can be too guilty of focusing on the technical side of our leader’s skillsets, while underdeveloping their emotional skillset. Emotional skillset is far more effective in leadership than technical skillset.
Within the most recent Leadership Workshop Webinar with Mindstar, Aaron and focussed in on those elements through both personal self-reflection and tapping into the emotional side of our leader’s work. The workshop was a great success and provided the opportunity for our leaders to reflect on the past few months, encouraging discussion on the good and the bad, and how this period will innovatively define how we move forward as a business into the future.
Aaron is always able to work in with what I want to see within the business. He doesn’t approach anything with an ‘off the shelf’ model; he understands that each business is bespoke, with bespoke challenges that requires varying leadership approaches and groups, and he is able to work smoothly with that.