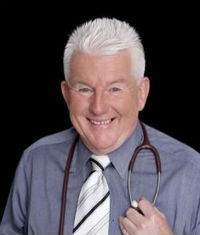 Dr John D’Arcy who is a family doctor, began his broadcasting career nearly 30 years ago as a producer and presenter for Seven News. He was the first medical practitioner appointed to an Australian newsroom and continues as ‘medical editor’ for The Seven Network’s Sunrise program.

Dr John studied medicine at The University of Sydney and has practiced far afield. In 1975 he worked as a doctor at The Holy Family Hospital at Qui Nhon in Vietnam and he and his wife, Wendy were evacuated just before the fall of Saigon.

He gained the Diploma of Obstetrics in the UK from the Royal College of Obstetricians and practiced on the Isle of Wight.

John has always had an interest in medicine in developing countries and spent three years in general practice at Goroka in the highlands of PNG where he established its first private medical practice, providing quality medicine for all the region, both indigenous and expat.

He finally settled, as a family physician, in Sydney where he could see the community benefit of combining evidenced based medicine with a media presence.

In the 1980’s and 90’s John was a presenter on the top-rating science television program Beyond 2000.
Today Dr John D’Arcy is a sought-after keynote speaker and he regularly presents at Australian and International forums which seek to promote good health awareness and sound public health policy. He has a excellent relationship with The Pharmacy Guild and in spreading the value of ‘Shared Care’ between doctors, pharmacists and other health professionals.

He is an ambassador for Australian Hearing and is alarmed that by age 60, sixty percent of Australians have a hearing impairment.

His program Health Check, is now heard every weekday throughout Australia. On weekends his one hour program Health Matters is aired nationwide on the Macquarie Southern Cross network.

Dr John is a weekly columnist for New Idea, assists in the production and presentation of Drive Time Medical, a bi-monthly family medicine training program for doctors throughout Australia.

Dr John D’Arcy is a Board Member for The Institute of Immunology and Allergy Research; an ambassador for The Sony Foundation with its emphasis on expanding the possibilities for young Australians and The Colo-Rectal Foundation, dedicated to research the cause and treatment of colon cancer.

Dr John and his wife Wendy have four children, love sailing, good books and nice Aussie tucker and when stimulated by being handed a rake, loves gardening.