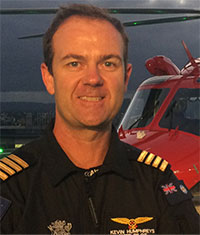 Kevin Humphreys is an ex-Army Officer, rescue helicopter pilot and mental health ambassador. Kevin Humphreys knows what it’s like to hit rock bottom. For a long time, Kevin kept his post traumatic stress disorder (PTSD), depression and anxiety buried deep. Today, Kevin shares what happens when you hit rock bottom, how he figured it out, and the triggers that made a difference in transforming his life.

Kevin’s 20 year military career flying Black Hawk and Chinook helicopters for the Australian Army is nothing short of stellar. At just 21, he earned the keys to a Blackhawk helicopter. Kevin would go on to complete several operational tours as both a pilot and commander in East Timor, Iraq and Afghanistan plus humanitarian operations in Papua New Guinea.

Despite Kevin’s direct exposure to rocket attacks, machine gun fire and highly risky rescue operations it wasn’t these experiences that made him feel his life was falling apart. Kevin says, “At the time, I didn’t know a single person who had experienced mental illness or suicide.” This fueled Kevin’s sense of failure and shame for ‘allowing’ a breakdown to happen, and a belief that he didn’t have the strength to go on.

A diagnosis of PTSD, depression and anxiety felt unacceptable to Kevin. While his return to work took nine months, Kevin kept his breakdown and illness a secret for seven years. Over time and with help, Kevin realised that he wasn’t a failure and his secret was holding him back from living a full life.

You’ll often hear Kevin say, “whilst you’ve got a brain and a blood supply you’re susceptible to mental illness, it doesn’t discriminate. The question is, will you have the courageous conversations required to turn this around?”.

When he joined the Army Kevin believed his life purpose was to serve his country through the profession of arms. Today, by pulling back the curtains on his own experience, Kevin’s purpose remains to serve but it now involves destigmatising mental illness, and empowering others to show courage and seek help.

It’s Kevin’s passionate belief that mental illness is normal, manageable and recoverable for most people. He shows that there is life after diagnosis and that it’s possible to return to the top of your game and beyond.

Since his recovery, Kevin has become a Flight Instructor and Examiner, and has held positions of Chief Pilot and Director of Operations in Search and Rescue helicopter organisations.

Kevin’s moving story enables him to share powerful messages about mental illness whilst inspiring men and women to have courageous conversations.