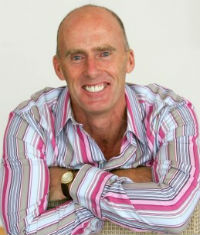 Mark is Consulting Editor to ‘Ultra-Fit’ Magazine, both in Australia and the U.K. He also reaches over 1.5 million people monthly through his columns in ‘The Age’, ‘Panorama’ and various other publications.
Mark has been short listed for the prestigious Million Dollar Round Table in Nashville in June 2002 and his second book, ‘Work a Little Less, Live a Little More’ has become the bible for work life balance in corporate Australia.

Mark is the author of the Healthy Lifestyle book ‘Every Day Counts’, the first book ever to be endorsed by the Australian Government’s Health Promotion arm, ‘Active Australia’.

Mark’s Every Day Counts program has also been ratified by fitness bodies throughout Australia.
Mark was Fitness and Team Building Coach at AFL team Collingwood for fourteen years. Collingwood also outsourced its entire fitness and training function to Mark’s team. He acted as Collingwood’s Club Runner for the AFL record of more than 250 games.

He also worked with Victoria in the State of Origin Series on five occasions. Â· Mark played VFL football for Melbourne and represented Victoria through the VFA.

In 1998, at age forty-one, Mark was part of the winning team in the inaugural AFL Triathlon, competing against current players from all teams. In the same year he competed in, and at the same time gave a commentary of, the gruelling British Cross Training Challenge in London.
The Third C in Success

Mark’s ‘Third C in Success’ keynote differs greatly from an overcoming adversity or survival against the odds theme, rather it is a practical, funny and inspirational guide to becoming more successful in your life, whatever your industry or life stage. The 45-60 minute keynote has 3 phases. The first is to explain what makes Mark successful (Mark’s favourite part!). The second is for each member of the audience to picture what success would be for them and the final stage is to use the 3Cs formula to make it reality. Full of Mark’s trademark humour, engaging style and anecdotes from the world of sport and business, ‘The Third C in Success’ is a great open or close for any conference or event. By the way, can you guess and do you use the 3Cs in your life?

It was fantastic. The hour passed before I knew it. I could have listened to Mark all night.