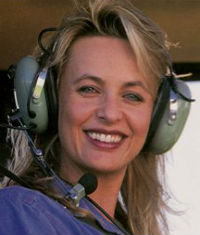 Allana Corbin’s aviation career began in 1988 when she began working for Balloon Aloft as ground crew and tourism marketing. Alana also began fixed-wing training and skydiving at this time.

On 22nd December 1990, Allana was a crew member on a Search and Rescue mission from Camden Airport dispatched to locate a missing training aircraft. The plane Allana was in, a Cessna 210, suffered a catastrophic engine failure and crashed.

Allana’s comeback has been described as miraculous – not only has she taught herself to walk again but in 1995, she gained her commercial helicopter licence and in 1997 became the first woman to circumnavigate Australia solo in a helicopter.

In October 1998, Allana launched her autobiography “The Best I Can Be” published by Pan McMillan.

Allana’s second book “Prisoners of the East” was launched in October 2002.

Allana Corbin is the Ambassador for the Ability Australia Foundation, the Public Relations Manager and a Line Pilot for Rotor-Lift.

As Public Relations Manager for Rotor-Lift, Allana was responsible for establishing The Tasmanian Air Rescue Trust, a charity set up to equip Tasmania’s Air Rescue Helicopter with the highest standard of medical and rescue equipment.