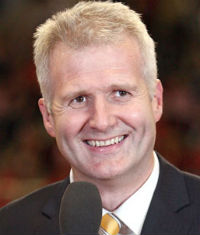 Andrew Gaze is one of this country’s true icons and undoubtedly one of Australia’s most recognisable and popular sporting identities. Andrew has been making a name for himself in the world of sports since the mid-80s, and now works as a commentator and public speaker. He is professional, witty, and known for spending just as much time mingling with guests as he does on the podium.After an impressive schoolboy career, the son of Australian basketball legend Lindsay Gaze made the transition to the NBL at 18 years of age and averaged 29.1 points per game in his first season. In 1989 Andrew played for the American university, Seton Hall, who reached the final four of the NCAA Championships that year, and was rewarded with a trial with NBA’s Seattle Supersonics.

In 1991, Andrew Gaze became the first Australian to play professionally in Europe, with the Italian club side, Udine. In a six-month stint in Italy, he averaged more than 30 points a game. Back home in Australia in 1991 he became the first NBL player to shoot over 1,000 points in a season. In the same year he won the first of his seven NBL MVP awards, and was also the first player to lead both scoring and assists statistics in the same season.In 1993 Andrew realised one of his lifelong dreams, when he captained the Melbourne Tigers to victory in the NBL Grand Final. Three years later, in his fourth Olympics, Andrew led Australia to a Bronze Medal play-off in Atlanta. The following year, Andrew was superb as the Tigers stormed into the finals on the back of a record-breaking 16-game winning streak. Andrew again led the NBL scoring table and capped 1997 off by winning his second NBL championship, his 10th NBL scoring title and yet another NBL MVP award.In 1994, Andrew made his debut in the NBA with the Washington Bullets. He resumed his NBA career early in 1999 after signing with the San Antonio Spurs who proceeded to win the
Championship and Andrew returned home with an NBA prized ring.Selected in a record fifth Olympics for Sydney 2000, Andrew completed a rare feat in Australian Basketball history. The highlight of Andrew’s final Olympic campaign was the honour bestowed upon him of the role of flag bearer and Captain of the Australian Olympic Team.

In 2002 Andrew was awarded an AM for his massive contribution to Sport in this country.
Andrew Gaze is an enthusiastic, energetic and colourful individual with a wonderful sense of humour. His infectious personality appeals to those of all ages and he has a natural ability to entertain and inspire.