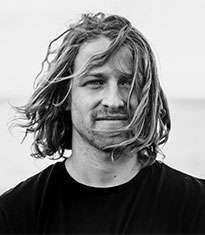 At the age of 18 (in 2012), Cam Greenwood had this crazy dream to start ‘Monsta Surf’, a brand that would be used as a platform to inspire people to live passionately and to ultimately serve the world.

With what started as a backyard hobby shaping surfboards, Monsta soon gained momentum and Cam was inspired to take things to the next level after a life-changing adventure in Kenya, where Cam stayed at the Huruma Childrens Home. He realised that life is quite simple, we just complicate it. As a result of that trip, the Monsta Foundation was dreamt into existence as a way that his dream could give back and Cam returned home to Australia inspired to create this platform he was dreaming of. He wanted to create an edgy clothing line to coincide with the surfboards he was crafting in order expand the vision for this brand that would be used to make the world a better place.

In 2013, Cam released this first line of clothing to the world. Since then, the ‘Monsta Surf Tribe’ has been growing and thriving throughout over 40 countries across the world and has been able to find it’s own voice in an incredibly competitive and saturated marketplace. The brand is now recognised as the surf industry’s first ‘social enterprise’.

In 2017, Cam & his team launched the Live Passionately Film. Documenting the journey of the Monsta Surf ‘Live Passionately’ movement. The film follows the brand ambassadors as they are taken on the adventure of a lifetime to the Philippines. Inspiring purpose, socially conscious living & adventure. A story that will reach millions!

Cam’s passion for creating beautiful imagery has lead him to launch Miraki Creative. A social enterprise that exists to do more than just tell stories through film. His vision is to use it as a platform to build bridges, between ideas and people, causes and world changers. Miraki Creative partners with their clients to go beyond their desired outcomes, using the proceeds of each project to tell the stories of those who need to be heard.

Cam Greenwood is a truly inspirational speaker whose personal story and approach to liferesonates with the youth of today. Cam delivered an influential and inspirational 1 hour talk to Prince Alfred College students which captured their hearts and minds. Cam’s determination to follow his own dreams helped our boys understand the virtues and character qualities required to achieve goals in life, despite setbacks. Similarly, Cam’s generosity of spirit to those less fortunate in the world brought a global perspective to his talk and joined together his core values on business stewardship, sustainability and charity support. Cam’s principles and core values sit respectfully within any school setting and his love of life and adventure motivates us all to move forward and embrace each day. His well-designed balance of spoken word and well-crafted film making make the audience experience interactive and engaging. I would recommend Cam to any school which is searching for a genuine presenter whom through humility, grace and sincerity, can share his passion for life and his commitment to personal integrity.

At yLead we search high and low to find relevant and relatable speakers for young leaders across Australia. This year we were incredibly lucky to connect with Cam Greenwood! Cam is a young person doing incredible things. Through his authentic ‘surfy and down to earth’ approach he has a gift to deliver stories and help people to realise the importance of following passion! Thanks Cam for making us laugh, smile and feel something through your presentation. Can’t wait to have you back again!