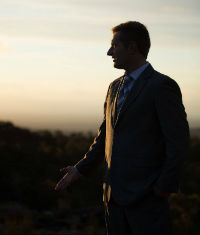 Daniel Burgess has had a diverse a background; from hard slogs in factories to a career as national brand manager.
Throughout his time he has had a passion for a full life adventure and having fun.

A defining moment for him was as a 20 year old passenger in a single vehicle accident where the driver fell asleep.  He was trapped hanging upside down in the car for 2 1/2 hrs.  Daniel had sustained life-threatening injuries. His back and arm were broken, neck vertebrae shattered, calf muscle suffered 3rd degree burns and his foot crushed; he was in a very bad way (nearly died). The doctors didn’t think he would walk again, needless to say they were wrong. Thankfully! After six weeks DanieI walked out of hospital (albeit very slowly with a cane) and started the long recovery process. He left his job, girlfriend, apartment and car behind and hitch hiked to Far North QLD to get his body and mind sorted out.

With very little money coming in Daniel homeless so he lived beside rivers, waterfalls and on the beach. It was a great way to recover; swimming and climbing every day to rebuild his strength, as he had no money for rehab. Some days DanieI had to walk aound Woolworths eating food to survive. This taught him so many lessons about survival and how that no matter how desperate the situation you can survive.  He embraced his surroundings, meeting all sorts of different people as he hitch hiked around the Far North. As Daniel’s walking slowly improved he started to feel he was able to get back into work and start earning money to rebuild himself. So after 9 short months Daniel started back at Queensland Rail, his doctor said it was too early and he needed to at least have 2 years to fully recover.  Daniel had a fantastic job working on the Kuranda Scenic train, responsible for the safety and enjoyment of the tourists on the train. His first full year at work was very tough as he readjusted and felt intense fatigue from his recovering injuries.

This is when Daniel Burgess started to ride mountain bikes,  he had a passion for cycling in his youth competing to a high level on the road and track competitions. He rode everyday and that become his focus and as he still had no car his sole mode of transport was a bike. Riding helped Daniel rebuild his strength and confidence slowly.  Everyone around him was constantly being very negative about riding and doing crazy things saying “How can you do this after all your injuries you’re crazy to be doing that”. It was getting beyond a joke, to the point he went and saw a top physiotherapist in Cairns and told him what he was going through with these comments. He gave Daniel the best bit of advice that set him on track, “Do not listen to anyone, you’re doing the right thing most people with your injuries give up, wither away and are dead in 20 years. Keep doing what you are doing because as long as your muscles are strong it doesn’t matter how bad your bones are”.
Over the next few years Daniel experienced a lot, he finally got compensation for his injuries finished up with work and spent the next few years unfortunately (having a great time though) spending all his money snowboarding, jet skiing to islands, motocross; you name it he had all the toys! After snapping his humerus (big bone above the elbow) in a very bad bike crash he had to have a year off riding from nerve damage so he sold everything and moved to Melbourne where he met his beautiful wife and rebuilt his life again :). Daniel now has two amazing boys who are healthy and love life and that is a true blessing.

What all this has taught Daniel is that everyone has a powerful story that needs to be harnessed and told. You can rise up at any stage and have a fresh start no matter what the odds. You have it inside you, you have all the tools and resources you need, you just need the belief. Daniel made many bad decisions and many good ones along the way. He can help you make better decisions. Over the last 5 years DanieI have been employed as a state manager and national brand manager so he understands time and money pressures, and the difficulty achieving family and work/life balance.

The Phoenix Experience is about new beginnings, life and reconnecting with who you are and what you believe in. Rise Up. Out of the everyday and into life.