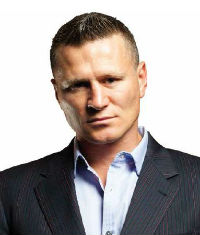 Danny Green is the only boxer from Australia to win four professional boxing world titles. One of the highest profile athletes in the country, Green’s laconic, affable laid back nature outside the ring belies his fierce and intense demeanor inside the ropes, his devastating power and aggressive instincts have earned him the well known moniker ‘THE GREEN MACHINE’.

A surfer from Perth’s Scarborough beach, Green left school to become a carpenter, and found his boyhood dream of becoming a world champion fighter a realistic possibility after nurturing and honing his power, intent and instincts, developing into a fighter of real substance.

Danny is highly respected in the community for his patience and willingness to engage his massive fan base, and more importantly for his philanthropy and help for people from all ages and walks of life. It is often stated that ‘his heart is as big as his punch!’

Danny has been a regular on our TV screens for the last decade, from live interviews on The Footy Show, The Project, a runners up position on the iconic Dancing With the Stars, to A Current Affair campaigning against violence in the streets, The Green Machine is the voice of the punters, always willing to lend a hand, looking after his young family, and working hard and enjoying his life to its fullest.

Green formed his very own promotional company, Green Machine Promotions back in 2002, and has incredibly promoted two of the biggest, most prestigious and highest grossing bouts in Australian boxing history. His company is universally recognized and respected as a very professional and integral outfit, putting on some of the premier boxing events that compete with anyone else in the world.

Danny’s story is one of triumph, despair, excitement and never say die! He has knocked many men out, and also been violently knocked out himself a few times in world title fights, and the one thing you can say about The Green Machine is that he has always had a dig, and done it with a grin, and this bloke will never die wondering.