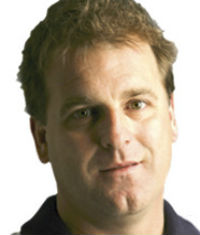 An enduring figure in Australian First Class cricket across a 15-year span, Darren Berry set a new benchmark for wicketkeepers at domestic level.

Darren Berry played junior cricket with Buckley Ridges in Melbourne’s southeast, before moving to he South Gippsland country town Wonthaggi as a young boy. He represented Australia at underage level before joining the Australian Cricket Academy in Adelaide in 1988. At the end of the scholarship year at the Academy, Darren Berry made his first class debut for South Australia in the Sheffield Shield in 1989/90.

Darren Berry’s record setting cricket achievements …  Capable of standing up to the stumps to medium pacers, Darren Berry’s sharp reflexes and clean glovework saw him quickly establish himself at state level. His ability is underlined by his ownership of the World Record for the most number of runs scored against (2,447) without conceding a bye.  Returning to his native Victoria in 1990/91, Darren Berry was part of the state’s first Sheffield Shield title in over a decade. It was the beginning of a record-breaking stint with the Bushrangers for Darren Berry who would become Victoria’s games record holder in Shield and one-day cricket and the first player to 500 Shield dismissals.   Darren Berry had his finest first-class season with the bat in 1996/97, scoring his the first of four Shield hundreds with 148 against NSW at the SCG. He was rewarded with a berth on the Ashes Tour of 1997 as a replacement for the injured Adam Gilchrist and again was exemplary with his keeping and batting.  Captaining Victoria to the Mercantile Mutual Cup in 1998/99, Darren Berry continued to set new records. He completed his career on another high, leading the Bushrangers to the Pura Cup title, 14 years after playing in his first triumph.

Darren Berry’s media sucess …  Having hung up his gloves, the qualified physical education teacher is currently employed with Triple M as a radio commentator on the station’s ratings-leading AFL coverage.   A weekly columnist with the Sunday Age, And coaches the Carlton Cricket Club in the Victorian Premier League.

Darren Berry is also busy on the corporate speaking circuit, where he is highly sought after.