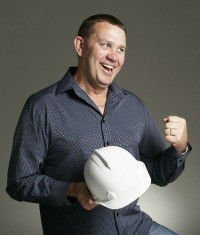 No doubt you will know about the famous Apollo 13 rescue mission that was turned into a major Hollywood film by acclaimed director Ron Howard. The film depicted the real life events of the incredible rescue mission devised by NASA’s mission control to save the lives of the three astronauts.
On the 25th April 2006 Australia and the rest of the World were stunned to hear about a major mine collapse in Beaconsfield Tasmania.  At 5.45pm on the 30th April, rescue workers discovered that Todd Russell and Brant Webb were still alive. What followed was an incredible coordination effort by dozens of rescue workers who were now focused on getting the miners out.
Sitting at home watching this unfold was explosive expert Darren Flanagan. That Sunday night Darren received a phone call that would change his life for ever. So began one of the most amazing rescue attempts in history.

The Rescue:
What Darren was about to attempt had never been tried before in the World, let alone in an attempt to tunnel to two trapped miners. A highly regarded explosives expert, Darren spent five days trying to re-fine an explosive charge that would tunnel through the rock without killing the miners.
After 29 hours of non-stop exhaustive blasting that left Darren physically and emotionally exhausted, Darren was able to eventually blast to within 300mm of the trapped miners enabling rescuers to get to Todd and Brant and complete this phenomenal rescue.

The Presentation:
That one phone call changed Darren’s life from being an ordinary family man into one of the real heroes of the ‘Great Escape’. His story is emotive, dramatic and extraordinary. It’s one of endurance and the triumph of the human spirit. As a result of the rescue, Todd and Brant nicknamed Darren ‘The Gun’.
In this emotional and truly memorable session, Darren will share his story and in doing so, demonstrate the capacity of ordinary people to show unrelenting spirit and perform under extreme pressure when faced with a set of extraordinary circumstances.

Darren’s presentations are always passionate and thrilling however Darren includes a mix of humour as well to ensure audiences are taken on a roller coaster ride. He draws guests into a real life drama. His presentation and stories are truly memorable. Darren is considered by the industry to be one of the very best motivational and inspirational speakers in Australia.

His talks cover areas including:

Darren was extremely moving speaker.  He was very emotional and honest.  He made us laugh, cry, laugh and cry again.  Evaluations from our delegates rated Darren an average of 5 out 5 with some putting 5++++. Darren was perfect for a Safety Conference and speaking to Safety Professionals.

Darren was amazing. Darren’s story was so raw and emotional and moved every single person in that room. Our audience consisted of 30,  50 year old tradesman who normally wouldn’t be seen shedding a tear, let alone from a speaker, but there was not a dry eye to be seen. Darren had strong messages weaved into his presentation that individually resonated with people, dependant on their personal situations. I heard comments saying that ‘I haven’t cried for 15 years, but he really moved me’. Darren’s presentation was truly a gift. Darren was by far the stand-out speaker of our Conference. His was an inspiration, and to add to that, he was genuinely a lovely, compassionate and personable man. We would definitely recommend Darren to any organisation.

Darren’s presentation has been the best we have ever ran.  I have never received such an overwhelming response from so many people at this site.  Importantly the safety messages that Darren is able to convey in his presentation really hit the mark for what we were wanting to achieve.

In a nutshell, he blew everyone away. Several of our guys who have been with us for 10 years or more said he was the best speaker we have ever had. It was nice to have someone who wasn’t overly professional (that’s not a criticism) and didn’t look like he was ‘just going through the motions’. He is an ordinary, genuine man who was caught up in an extraordinary set of circumstances everyone in the room was moved by his experience,  a lot of our delegates are men in the construction industry – they’re not known for being easily affected.