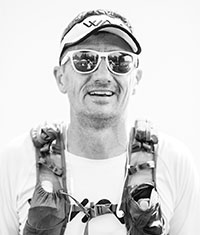 ‘Don’t Look Back’ were the words Dion told himself at the vulnerable age of 13 when he left behind an unhappy, unstable and destructive family home for the unpredictable life on the streets with nothing and no-one to guide him. Dion’s fight for survival led him to become overweight, alcohol dependent and smoking more than a pack of cigarettes a day, all trying to hide the inner demons from his childhood. In his late 30’s Dion looked at himself in the mirror and realised he needed to make a change and he turned to running, long distance running known as ‘ultra running’.

Sticking to the‘Don’t Look Back’mantra Dion became iron willed with an innate ability to survive even the most unlikely and terrifying of situations and become one of the worlds top ultra runners going on to compete and complete some of the toughest and most extreme endurance ultra running races in the world across the planets most inhospitable locations. Dion has tested, pushed, broke and set new limits across formidable landscapes from inhospitable deserts, high altitude mountains to wild jungles in which Dion along the way has rebuilt his mental and physical limits in search of the ultra high, to find himself and to become the best he can be.

Dion’s life changed forever when he was running a 250km race across the formidable GobiDesert in China when a little stray dog started to run beside him. During the race, for the first time ever Dion broke his ‘Don’t Look Back’ mantra to turn around and help the dog and this was the start of a friendship and bond that would prove unbreakable as the dog would continue to run 125km of the race. Dion named the dog Gobi and his promise to bring Gobi home went viral, taking the world by storm. But before Dion could bring Gobi home she went missing in China and the story of ‘Finding Gobi’ began.

Dion’s amazing true story and incredible journey of ‘Finding Gobi’ has since become a New York Times Bestseller, Sunday Times Bestseller and International Bestseller, printed in more than 21 languages which has also resulted in an upcoming movie. Dion has been interviewed and his story featured around the world on media appearances with CNN, Good Morning America, Today Show, ESPN, CBS, Fox, ABC, BBC and in the press with Washington Post, New York Times, USA Today and The Times.

Dion’s dedication, perseverance and ‘Don’t Look Back’ determination prove it’s possible to conquer extraordinary challenges whether that is against the desert or day to day life. Dion’s drive to succeed in not only ultra running but life and business is unquestionably one of his strengths, see how he brings an audience to life and fills them with motivation and self belief. Dion has been invited to speak at motivational, inspirational and corporate events ranging from hosting Duke of Edinburgh awards with Prince Edward, Ted X, literature festivals, solo theatre events, international and public schools, universities and animal charity ceremonies.