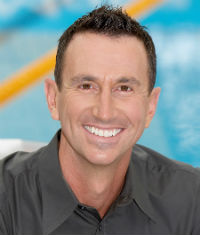 Olympian, television presenter, public speaker, charity worker – Duncan Armstrong is all these things and much more.

Duncan approaches everything in life with the same zestful attitude that helped him win Olympic Gold for Australia.  This approach has also motivated and inspired thousands of people to achieve their highest corporate and personal goals.

Duncan became a household name at 20 years of age with his upset win in the 200 freestyle at the Seoul Olympics in 1988.  It was Australia’s 100th Olympic swimming medal.

Since retiring from international swimming Duncan has enjoyed careers in television and radio, motivational speaking, endorsements and corporate partnerships.

Duncan has also won a host of honours including Young Australian of the Year, a Centenary Medal and an Order of Australia Medal.

One of Duncan’s strengths is his public speaking. Whether it’s for an intimate stakeholders’ luncheon, or for a company-wide event, Duncan can make any function a memorable success.

As a born performer Duncan likes nothing better than transforming an audience, motivating through inspirational sporting stories.
“I deliver motivation in the same

way that helped me during my drive to be Olympic Champion.  I was introduced to some unbelievable success stories that really changed my life, and made me believe I could achieve anything.  I want to inspire my audiences so they too can achieve their dreams”

Addressing over 120 audiences every year in the areas of leadership, teamwork, fulfillment, goal setting, and branding, Duncan designs his presentations to specifically suit his client’s topic and event outcome.

When Duncan came in to talk to our employees during a mid-year company retreat, we weren’t sure what to expect.  But after just a few minutes, it was clear he knew what he was talking about. He had everyone laughing and participating. Every single person who attended, from the receptionist to the CEO, left his 2-hour talk feeling refreshed, recharged and excited to be working for our company!
Jacquie Brophy

Duncan was simply excellent and did exactly what we asked and more, he provided fantastic inspiration to the sales team to get out there and continue to perform at their highest personal level.Duncan clearly took the time to prepare to talk to us and tailored his presentation accordingly.  He showed a clear understanding of the audience and successfully related to the team on many occasions during the presentation.  By the end we all felt we were part of Duncan’s success and he was a part of ours

Our aim to raise our profile was definitely achieved – and then some!!!  MWLP is ‘on the map’ and a huge amount of this success was due to YOU, your motivational and inspirational messages and, of course, humour!!!  THANKS

Fantastic motivated speaker with real world connections to theory and practice. Again 10/10. Would have loved the session to have been longer. Great inspirational leader and motivator. Very entertaining presentation with a new perspective to leadership and motivation. Absolutely Brilliant – Do not ever run this course without this speaker