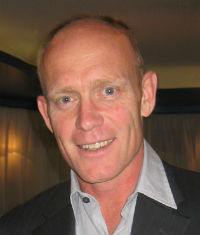 Eric Philips is a polar adventurer dedicated to exploring the vast and varied ice landscapes that typify our polar regions. His outdoor career spans more than 25 years during which time he has worked professionally as an IPGA Polar Guide, outdoor educator, film maker, motivational speaker, team facilitator and musician.

As an adventurer, Eric has visited every continent on earth, often leading lightweight and self-supported expeditions to remote areas.  He has explored the world’s four largest icecaps and was the first Australian, together with companion Jon Muir, to ski to both the North and South Poles, locations that he has since visited many times as a polar guide.

Through his experiences Eric has developed alternative and highly efficient methods of travel in the polar regions and has embraced the use of specialised plastics in the construction of polar-specific equipment. He is the inventor of Flexi Ski Bindings as well as a range of other niche adventure products used in extreme-cold. He has been a professionally-sponsored adventurer and product-tester since 1995 for established brands such as Mont, Smith Optics, Baffin Mountain Hardwear, Grivel, Oakley, Leki, Dagger, Perception, Sony, Suunto and Iridium.

Eric is the author of Icetrek. The Bitter Journey to the South Pole and his expeditions have produced four internationally-screened documentary films, most notably, the Emmy Award-winning Greenland production, Chasing the Midnight Sun.

Eric lives in Hobart, Australia with his wife, Susy, daughter, Mardi and son, Kip. He is the owner and director of Icetrek Expeditions.