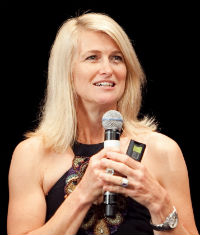 Heather Swan is a dual world record holding wingsuit pilot, a mountaineer, an award winning writer, an adventure photographer, wife & mother, and popular professional
speaker.
Her professional speaking presentation is based on the incredible story of how, as an ordinary 40 something mum with no background in adventure (or even fitness), she
became a dual World Record Holding extreme sports woman.
Heather was a highly successful corporate executive who held senior management positions in Australian and multi national corporations. Until 1995 she had never planned to climb anything other than the career ladder. Then she went to a corporate breakfast and was mesmerised by the speaker, Dr. Glenn Singleman. He was a world record holding mountaineer and BASEjumper who spoke about mental mastery to overcome fear. After his presentation Heather introduced herself and three years later they were married. Not content to stay at home while Glenn went adventuring, Heather challenged him to teach her to skydive, climb and BASEjump so they could set a new world record together. She had no idea what she was in for – a six-year-long roller coaster ride of wins, devastating losses, near death experiences and ultimately the spectacular achievement of her goal to make the Worlds Highest BASEjump in a wingsuit.
Heather is one of only two female Wingsuit Instructors in Australia.
Her story had been profiled twice on ‘Australian Story’ and she and husband Glenn have also been featured in two 60 Minutes segments. A feature documentary was released world wide in 2011 and her latest book, No Ceiling is now available.
Heather lives in Sydney with her husband and daughter.