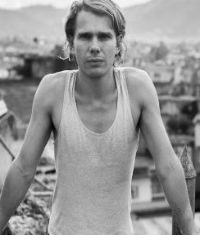 On October 31st 1999, aged 18, Jesse became the youngest person in history to circumnavigate the globe, solo nonstop and unassisted. People from all walks of life followed Jesse’s 328 day journey. The fact that over 25,000 lined the shores at Sandringham to welcome him home is just one indication of the impact he has had on young and old alike.

Jesse filmed his entire journey, and this footage is the basis for the television documentary entitled Lionheart : The Jesse Martin Story. He has also written a captivating book Lionheart : A Journey of the Human Spirit which has subsequently sold over 110,000 copies worldwide. After arriving home the first question on everybody’s lips was “what do you do next?”

Kijana was Jesse’s next dream. In March 2002 he left on his second world attempt, this time with four friends aboard the 54-foot timber ketch Kijana. On the surface The Journey of Kijana had all the makings of an absolute dream adventure. Jesse and four friends, sailing around the world for three years, in search of paradise and wild adventures in exotic places. But somewhere between the vision and the voyage, life and human nature intervened. From crew problems to an emergency when Kijana landed on a reef, threatening to die a painful death with the outgoing tide, these events ultimately brought the journey to an early end. Jesse’s account of the voyage in the book Kijana The Real Story is a warts-and-all account of what really happened – the crew’s adventures and euphoria, their disappointments and heartache and of course their fights and friendships.

Jesse’s next ambitious project takes a break from his previous exploits on the water and heads North to the wilderness of the Canadian Arctic. The aim, a trans-continental solo voyage from the Canadian East coast to the West coast of Alaska – a distance of some 4800 klms. During the expected 9 month adventure Jesse will use traditional modes of transport only with a dogsled during winter and Birchbark canoe during the warmer months.

A Captivating Speaker with a Real Message.

You are an impressive young man and your courage and determination are an inspirational example.

Such strength of purpose is admirable.

Our feedback from United Nations headquarters has been extremely positive and your input was instrumental in ensuring that Australia’s participation was a success.