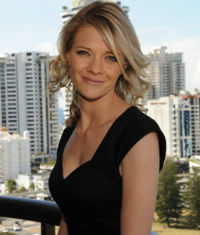 Jessica Watson set out to become the youngest person to sail solo non-stop and unassisted around the World.

Since Joshua Slocum first sailed singlehanded around the world in the late 1890’s, sailors of all nationalities and ages have been drawn to this ultimate challenge: The Everest of sailing. Slocum’s epic tale of his voyage, Sailing Alone Round the World, has captivated a global audience of readers for over a hundred years.

Following on, record-breaking solo circumnavigations by heroes like Francis Chichester and Robin Knox-Johnston have captured the attention and the hearts of people all over the world.
Inspired in her turn by Kay Cottee, the first woman to sail solo non-stop unassisted around the world and by Jesse Martin, the youngest person to do so, Jessica Watson set her sights on beating Jesse’s achievement and stopped the nation when she sailed back into Sydney Harbour on 15 May, 2010.

On January 25, 2011 she was awarded the prestigious Young Australian of the Year title.
In December, 2011, Jessica skippered the youngest crew ever to compete in the iconic Sydney to Hobart yacht race, finishing second in their category.

In January 2012, Jessica was announced in the Australia Day Honours list, receiving an OAM (Order of Australia Medal) for services to sailing and being a role model for the youth of Australia.
Jessica hopes to continue to inspire our youth, other adventurers and everyone with a dream in their heart.
Born: 18th May 1993 on the Gold Coast, Jessica currently lives in Sunshine Coast, QLD Australia.

Attitude: Always make the best of everything, Be positive, ask questions, lots of questions.
Interests other than sailing: Anything outdoors and on the water, camping, the beach, reading, cooking, weather, fencing, dingy sailing, boat design and CHOCOLATE!