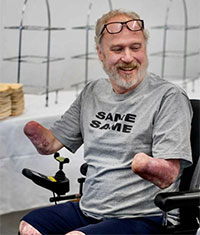 His legs fell off, and half his arms went missing.

John will be the first to admit that, up until then, he hadn’t lived an exceptional life. But, as it turns out, John is an exception.

In the days, or weeks, leading up to his birthday, John crossed paths with meningococcal disease. It didn’t kill him. But, while in a coma, busy not dying, John also contracted septicaemia. It was the septicaemia that caused John to lose both his legs and his hands.

Spend some time with John as he shares with you:

Sweat the small stuff – [proportionately] – you never know, one day your legs may drop off!

AMPATHY – new word, old concept – ‘walk a mile in my lack of shoes’