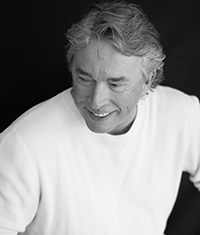 From War Zones to Olympic Games, from Red Carpets to National Elections, if it was a big story,  Jonathan Gravenor was there.

For over two decades he was a Foreign Correspondent, a Broadcast Journalist, and Presenter delivering the news to millions of people. In the word of Journalism he had it all, that is until that all included cancer.
Suddenly faced with the possibility of impending death he was forced to look at who he was and what his legacy would be.

Undergoing radical surgery, radiation, and chemotherapy treatment, he realized his biggest struggle was not recouping from the physical assault his body was under but recouping from the life he had built. It started him on a Pilgrimage to become a better man.

And while he traveled the world to Ashrams in India, Gurus in Nepal, seminars across Europe, he discovered the most difficult journey was inside himself where he would have to confront the lies we tell ourselves.

What he discovered completely shifted his views on what was important, and what abundance truly is.
Now instead of writing the news, he was writing his story, detailing his journey around the world and through himself.

In 2017 TED Talk organizers, after following his blog, asked him to speak in Florida. Once released his talk went viral, becoming the most watched Video in several countries on YouTube, and even here in Australia trending at #3 for close to 1 week.

He also released his first book in late 2017 “The Other Side of Ego” which was nominated as a Finalist in the North American Indie Book Awards ahead of thousands of other titles.

Reviewers describe his book as honest, raw beauty that the reader cannot put down.
He is now working on a new book and has been speaking across Australia and in North America and the UK.

Jonathan doesn’t just speak about his journey with cancer, rather the battle to find humanity and humility and then in that true purpose to our lives.

Jonathan can also tailor his presentations to suit the individual needs of of the Client.