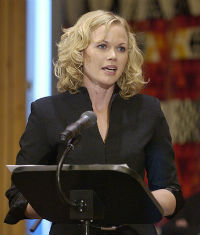 Katrina Webb is recognised and acknowledged for her unique athleticism and outstanding success as a Paralympic athlete.

When Katrina was 18, on a netball scholarship at the Australian Institute of Sport, she discovered that a weakness on her right side was a mild case of Cerebral Palsy. Something she had known since birth, but because she was not sure what it was and it is not obvious, she found it easier to hide.

At the Athens Paralympics Games in 2004, Katrina won another Gold medal for the 400m sprint and set a new Paralympic Record. Katrina’s success on the track has made her one of Australia’s top performing Paralympic athletes.

Now one of Katrina’s biggest rewards in her life has been to learn how to overcome her disability, love her uniqueness and celebrate her difference. With her natural positive attitude, a love for new challenges and excellent people skills, off the track Katrina is the Director of her own business Silver 2 Gold High Performance Solutions. As a qualified physiotherapist and a person that knows how to achieve gold medal results more than once, her business specializes in ‘Turning Silver to Gold’ and improving the performance and health of organizations, teams and individuals.

Katrina’s success as an athlete and as a business woman has been recognised internationally, when she was one of four athletes selected from around the world to present at the closing ceremony of the United Nations International Year of Sport and Physical Education in New York in 2006. She was also named one of three International Paralympic Committee Ambassadors at the London Paralympic Games 2012.

Katrina Webb OAM
Katrina Webb OAM may well be recognised for her unique athleticism and outstanding success as a Gold, Silver and Bronze winning three times Paralympic athlete, but it is her success off the track as a professional speaker and high performance consultant that has seen her requested by corporate clients worldwide to help improve the performance of their people.

Speaking Services
Katrina Webb OAM is a unique and inspiring speaker who will motivate and challenge your audience. Delivering more than 500 presentations to over 100,000 people across five different countries, Katrina is arguably one of Australia’s most highly regarded professional speakers.
Through thorough research, a tailored approach and innovative delivery, a presentation by Katrina will enable your audience to connect with your message and look to apply it to their own situation, helping you to meet the key objectives of your workshop, meeting or conference.

Topics Topic 1: ‘Running on No Matter What!’ -­‐ Overcoming obstacles and making it happen.
This motivational and inspiring session focuses on taking responsibility, having a positive mind set and staying motivated when dealing with change and obstacles.

Topic 2: Turning Silver to Gold -­‐ Creating a winning performance Focus on the three key areas of 1.Sustaining optimal energy levels in the workplace 2. Increasing productivity and effectiveness of individuals and teams, and 3. The power of the mind, overcoming obstacles and learning from the minds of elite athletes, this proactive and informative session will help you discover strategies to create a gold performance time and time again.

Topic 4: Living Balance
To be truly successful, we need to learn the skill of juggling our career, family and personal well-­‐ being. This proactive and interactive session will provide strategies to increase energy and efficiency levels without burning the candle at both ends!

Topic 5: It’s great to be different -­‐ Love your uniqueness and celebrate it! An inspiring and memorable session for senior and junior school students that provides unique strategies to optimise performance and opportunities at school and beyond.

Hosting and Emceeing
Katrina is also available to host/emcee your next event or conference.

Silver2Gold High Performance Solutions
Established in May 2000 by Katrina Webb, Silver2Gold specialises in working with orgainisations, individuals and teams to achieve high performance outcomes. Bringing the best of sports psychology and business together, organisations are transformed through well researched, high quality and tailored solutions designed to meet their diverse needs.
Our clients range from International Blue Chip companies such as ING and Prudential through to some of South Australias forward thinking Local Councils, Schools and SME’s who all share the common belief in the potential of their people.

Tailored high performance solution -­‐ For organisations to strive for a ‘gold’ performance and to get the best out of their people, Silver 2 Gold focuses on three key areas:
1. Sustaining optimal energy levels in the workplace. 2. Increasing productivity and effectiveness of individuals and teams. 3. The power of the mind -­‐ overcoming obstacles and learning from the minds of elite Athletes.

Corporate Health and Wellbeing Program – “Living Balance”
The Living Balance program is a holistic approach to changing the long term health habits of participants, resulting in more energy, reduced stress and a measurable lowering of Health Age. The program includes pre and post health testing and life balance profile, a seminar series supported by personalised coaching and all resources including a course workbook.

Thank you for your time, your advice and your experience. I have gained so much simply from listening to your story and am excited about the way forward. I am looking toward a more focused, streamlined life where I can achieve all of my dreams, no matter what they are! Thank you for all that you have given me and please know that I consider myself extremely fortunate that your invitation to speak at this conference did not fit into the ‘no’ category!

Katrina delivered inspiration to all those who attended the launch of Small Business Month 2009. Not only did Katrina relate her story to the key messages that the event aimed to deliver, but also provided the audience with several positive messages that they were able to relate to and implement both professionally and personally, especially in challenging times. Katrina is a true professional who is of great value to anyone wanting to inspire and motivate an audience.

The absolute best presenter I went to. I didn’t lose interest at all. She captivated the audience. Valuable tips that I can actually complement in my personal and professional life. Wonderful. I loved it. Katrina is an amazing person. Inspirational, excellent speaker and presenter.