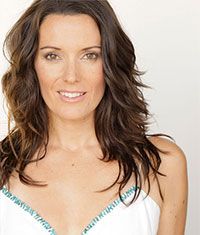 From superheroe stunts in Hollywood blockbuster movies to extreme survival feats in the world’s most challenging wilderness, this Aussie adventurer’s incredible achievements have all been kickstarted by those two words.

She’s a real life Wonder Woman, but this superhero wasn’t born with special powers. At 19, Ky’s quiet life in rural South Australia was overturned when a car accident broke her back. Doctors told her she’d never be physically active again.

It was the first ‘you can’t,’ Ky decided to ignore, and it changed her path forever. She fought her way back to full health, and while rock climbing as part of her rehabilitation, discovered a deep love for the wilderness. As an outdoors guide, she shared this passion with others while pushing the limits of her own survival skills, learning to survive in the bush with nothing but a knife.

Ky pursued a dream career in stunt performing and travelled to Canada for three years of intense martial arts, stunt driving and weapons training. But still, she heard those familiar words: ‘you can’t.’ Told she was too tall and too old, she persevered regardless, landing a top job as Sharon Stone’s stunt double in the movie Catwoman.

Soon after, she doubled Jennifer Garner in Elektra, Jaimie Alexander in Thor and the NBC series Blindspot, plus A-list names including Anne Hathaway, Ellen DeGeneres and Jessica Biel. In 16 years at the top of the stunt game, her many achievements included winning Best Female Stunt Performer in the world in the 2012 Taurus Awards (the Oscars of the stunt industry).

Despite the red carpet glamour, the outdoors was still Ky’s first love. Following the call of the wild, she challenged herself to new extreme survival expeditions, this time facing the camera as herself.

Ky produced and documented an extraordinary 200k hike across the Sierra Nevada mountain range with survival expert Thomas Coyne. She featured in three episodes of Discovery’s Naked And Afraid, and was the only female in Season two of Discovery’s Ed Stafford: First Man Out, braving a 4,000m mountain climb and minus-22 degree temperatures.

Although she’s conquered gruelling terrain in over 65 countries, Ky has always remained a proud Aussie, and after 15 years, she’s happy to be home.

Passionate about her country’s unique landscape and wildlife, she shared the beauty of the Aussie bush in her 7Mate series Outback Lockdown. She’s a wilderness warrior in the tradition of the late, great Steve Irwin, but with a uniquely female approach.

In her book, Girls’ Own Survival Guide, Ky shared her survival attitudes with women everywhere, and her motivational speaking frequently focuses on empowering and supporting girls to achieve their potential. She inspires them to tune out the ‘you can’t’ voices and reach for the stars, just as she did.

Ky’s key message is the one she lives by: “Above all else, believe in yourself. You can do it.”

Ky is one of life’s fighters and survivors. I love her spirit and determination to live life to it’s max.