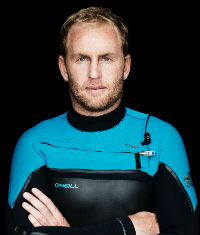 In the last 10 years Mark Matthews has taken himself from a penniless want-to-be surfer, to an international brand name, part time philosopher, story teller, big wave surfing legend and all round good guy.

His story is one of commitment, leadership, hardwork, innovation, struggle and maximizing available talent. He has also learned a lot about sus- taining peak performance over an extended period.
Winner of an unprecedented 3 back to back Oakley Big Wave Awards Mark has cemented himself as one of the best big wave surfers in the world. His passion is motivating people to step outside there comfort zones so they can access there true potential.
He uses a compelling mix of spectacular video footage and personal stories to engage and inspire audiences around the world.

The courage to commit.

Mark Mathews did not start riding big waves overnight. Mark tells his story of how he began surfing and developing the skills to ride big waves. He explains the importance of being able to tap into an unwavering source of motivation played in overcoming his crippling childhood fear of the ocean. “You have to want it more than you fear it!”

Whilst surfing a famous big wave break in Tasmania, Mark suffered a potentially career ending injury. His physical recovery was relatively quick but his mental recovery was another matter. The wipeout gives him a new outlook on the importance of not only managing stress but learning how to adapt and eventually overcome it.

Capitalising on the next wave of opportunities.

After recovering from his wipeout Mark takes what he learnt from his failure and uses it to go on to win the next 3 annual “Oakley Biggest Wave Awards” and eventually signing sponsorships he had once only dreamed of.

People were captivated by Mark’s talk, he was genuine and authentic and his message resonated well with our managers. – I was so pleased to hear all the compliments and thank you’s from faculty and staff for having Mark close out our cross functional segment of TAP.

Mark’s presentation was very inspiring. His content was outstanding and his story was excellent. I would certainly recommend Mark for all types of occasions.

I truly believe you have helped my Soldiers overcome fear and doubt on many levels.They exhibit the same attitudes you spoke of, they have found something that they want or value enough to allow them to overcome their fears.

We loved having Mark Mathews take part in the launch of Intel’s 6th Generation Core Processor in Sydney. Mark has a great story, he is passionate and is an absolute natural on stage. He is a true professional and we look forward to working more with him in the future.

He spoke from the heart and was as amusing as he was incredibly inspiring, leaving the audience on a high note to enjoy the rest of the evening. He is a breath of fresh air and would be a fabulous asset to any event.

Nothing short of outstanding. Mark’s presentation was truly awe-inspiring.