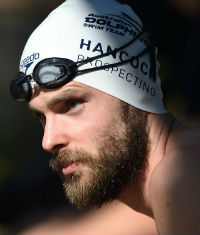 Matthew Levy was born premature at 25 weeks with Cerebral Palsy and is legally blind. He has had approximately 40-50 operations ranging from Heart, Lungs, brain and ear. From the very beginning life was a challenge, with the support of his parents and countless medical professionals he was able to come out the other end strong and motivated to achieve in life.

Australia Day Ambassador, 2005 – Present
This included speaking at the Australia Day Address and interacting with the local community and VIP’s at various rural and metropolitan locations. Talking about experiences, achievements and pride in being an Australian.
Westpac International Disability Day Ambassador, 2010 – Present
IDPwD is a United Nations sanctioned day that is celebrated internationally. It aims to increase public awareness, understanding and acceptance of people with disability and celebrate the achievements and contributions of people with disability. This what Matthew helps celebrate at Westpac.
Life’s Little Treasures Ambassador, 2011 – Present
The Life’s Little Treasures Foundation is Australia’s leading charity dedicated to providing support, friendship and information, specifically tailored for families of children born premature or sick. The Foundation’s services are available in the hospital (neonatal and special care units) and in the community when families come home
Athlete Leader Swimming Australia 2012- Present
A mentor to the Paralympic Swim team and a mentor to the upcoming athletes in development squads. 1:1 catch ups or group meetings talking about what it means to be an athlete on the Australian Team,
National Aboriginal Sporting Chance Academy (NASCA)      October 2008 – Present
Teaching children in rural communities the importance of nutrition, education, and sharing his personal sporting experiences (including goal-setting and achievement)
Telstra Paralympic Education Program, 2005 – 2012
Aims to develop awareness of the Paralympic games, Paralympic sport and the athletes by teaching students about disabilities, health, social issues and sport’s importance to the community
Vision Australia Speaking Program, 2006 – 2011
This includes speaking to schools and communities about experiences and the role Vision Australia plays in the helping of blind and vision- impaired people.

Matt recently presented to my Qld team of senior bankers. His presentation was authentic and genuine, sharing key personal insights around achievement and goal setting that resonated strongly to the group. A great motivator, thanks Matt Levy

Matt recently came to my Team empowerment day to talk over his life, achievements and challenges. His story is uplifting and inspirational and my team really enjoyed listening to him and felt uplifted. Would recommend Matt for anyone who is looking to have someone talk to their team.