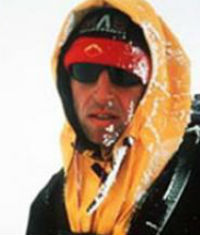 Peter Bland’s lifelong urge to walk the thin line between adventure and catastrophe has led him to the ends of the earth and forced him to test the limits of his own body.

In 1998, 35-year-old Peter Bland fulfilled his lifetime ambition by becoming the first Australian to walk to the North Magnetic Pole, and the only one to have ventured to both the North and South Magnetic Poles.
What makes Peter Bland’s accomplishment even more remarkable is that he completed his expedition twelve months after his second bout of major heart surgery.

However, Peter Bland faced his biggest challenge in 2000 when he and childhood friend, Jay Watson, set out on the first ever unsupported crossing of the Antarctic Peninsula. With no dogs, vehicles or doctors, they set out to conquer the stretch of craggy mountains, glaciers and ice filled bays known as the ‘Great White chaos’.

On the last day of their journey, an avalanche plunged Peter Bland into a 14 story deep crevasse. With his pelvis crushed, ribs broken and skull fractured, Jay lay on Peter for three days providing him with enough body heat to survive until rescuers arrived. Suffering severe brain trauma, Peter required a year of speech therapy, physiotherapy and ongoing medical attention before he could function normally again.

Peter’s extraordinary tale of recovery and his determination to rebuild his life led to the production of the documentary ‘Hell on Ice’, seen by over 45 million viewers worldwide, the publication of the Australian best sellers, ‘A Step Too Far’, and has helped him raise over $14 million for Australian Charities.

A brilliant and inspiring speaker, Peter Bland helps people to identify the goals that engage their heart. Peter believes that once the heart is engaged, success is just a matter of timing.