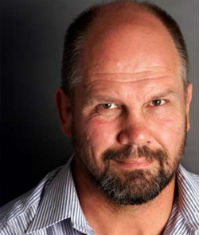 Peter FitzSimons is a well-respected columnist for The Sydney Morning Herald and Sun-Herald, speaks four languages, has played rugby for Australia, co-hosted radio shows with Mike Carlton and Doug Mulray, interviewed famous people around the globe from George Bush to Diego Maradona and written 25 best-selling books.

He is the biographer not only of World Cup winning Wallaby captains, Nick Farr-Jones and John Eales, but also former Opposition Leader Kim Beazley, boxer Les Darcy, aviator Sir Charles Kingsford Smith, war heroine Nancy Wake and Antarctic explorer Sir Douglas Mawson. In 2001 he was Australia’s biggest selling non-fiction author, and duplicated that feat in 2004, with his book on Kokoda. He has been Australia’s best-selling non-fiction author in the last decade and in November 2013 released his current best-seller on Ned Kelly.

The most popular after-dinner speaker in Australia, he is married to The Project co-host Lisa Wilkinson and they have three children.

Born on a farm in Peat’s Ridge, Peter went to Knox Grammar School, before accepting an American Field Service Scholarship to go to Ohio for a year. He returned to complete an Arts degree at Sydney University majoring in government and political science. In 1984 he broke into the Wallabies under the coaching of Alan Jones, then lived in France and Italy playing rugby for the next five years whilst learning both languages as well as Spanish. Upon his return to Australia he again played for the Wallabies, under Bob Dwyer, going on to play seven Tests.

In 1989 he joined The Sydney Morning Herald full-time, and has been one of their most popular columnists since. Andrew Denton has called him “Australia’s finest sports journalist.”

Peter boasts an impressive list of interview credits including ex-president George Bush, Sir Edmund Hillary, Jodie Foster, Nicki Lauda, Joe Montana and Carl Lewis as well as all the major Australian sporting figures from Shane Gould to Lionel Rose to Herb Elliot. He has interviewed every Australian Prime Minister from Gough Whitlam through to Julia Gillard.

He has the distinction of being the only Wallaby sent from the field in a match against the All Blacks – unjustly, he swears. He was co-host of the Today Show 15 years before his wife, Lisa Wilkinson – even if it did last for only a day. He has fought a Sumo wrestler at the Opera House, danced on ice with Torville and Dean, told Alan Jones to his face that he is dead freaking wrong and opened a door for the redoubtable Germaine Greer . . .  and lived to tell the tale!